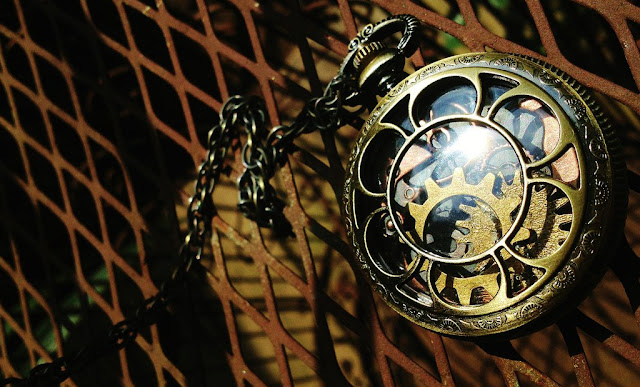 Got back from Scotland about a week ago. Managed to do a couple of days of writing, then sat down yesterday and bashed out 3k on Secret Order of the Literati.

I was writing three stories - two novels and a novella, but I've ditched the novella for now. Focusing on the two novels, and loving them. Two very different styles, though both contemporary.

Up until this point you can't be entirely sure whether all the weird stuff that's been happening is explainable or magical. I've finally committed to the reveal. The shit, so to speak, just got real. If only I knew what the shit was. I'm still not entirely sure where I'm going with any of this, but the characters are now strong enough to lead the way.

Recently I was in a café called Coffee & Curios in Gloucester. Along with a fabulous fried breakfast, they also have a selection of steampunk-esque pocket watches. I couldn't resist. But they also inspired a quirk in one of my characters (rough as ever):

Slowly, almost reluctantly, Aesop reached into the pocket of his skin-tight jeans. Suzan had never noticed the thin silver chain looping from his belt before. It was a delicate thing. On the other end was a pocket watch, one of those old ones with a window, where you can see all the inner workings.

“Every morning, every evening, until the end of time,” she replied.

Uncurling his fingers from hers, she pinched the winding mechanism and began to twist. When it would twist no further, she pressed down on the button and slipped the watch back into his pocket.

“I preferred it when you wore waistcoats,” she said. “It belongs near your heart.”

It appeals to me, this character who religiously winds up his watch, uncertain whether he will die should it stop. Maybe he would, and this simple act keeps him alive forever. Or maybe he is immortal, and it wouldn't matter if he threw the watch away. But he will never, ever know.

I needed a little something to make Aesop vulnerable, otherwise he's a bit sharp-edged to be lovable. Mortality and memento mori are always good levellers when you don't think you can love a character.

On the whole, things are shaping up well. Only one character's gone missing entirely. He featured quite a bit at the beginning, then I rather lost the thread and have no idea what happened to him. I plan on getting to the end of the first draft and finding a way to write him back in.

One thing is certainly clear: this book will need editing like nothing I've written before. Usually everything falls out in more or less the right order. This just fell out in no particular order. I don't think I've ever had to rearrange chapters for continuity before. I'm not looking forward to it.
at 15:07