Why My Editor Kicks Ass 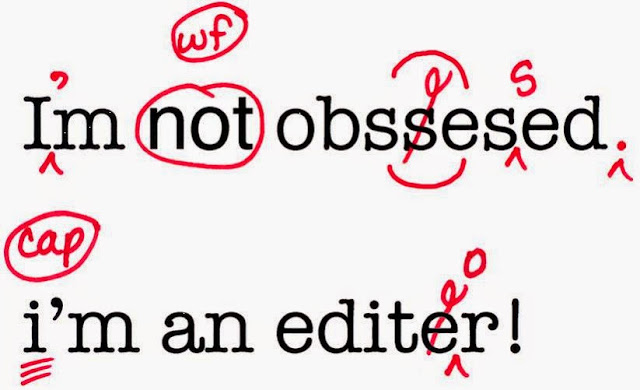 I haven't been writing anything lately. Struck down by a cold, buried beneath a pile of RealWorld (tm) work and what little time I have had to write, I've spent panicking over a competition submission. I haven't entered a writing competition in donkey's, but this one just happened to catch my eye.

It requires a sample of the novel I'm working on - the first 15k, consecutively.

I swore off editing anything until I'd completely finished the MS, but it's at around 110k at the moment, and I reckon there's only another 10k left to go. So it'll be done by the time the results are in.

It's hard enough editing 15k when you can kick back and relax, but trying to get through such a weighty sum to a tight deadline is horrid.

Worse, I needed to lose around 1,000 words to include a synopsis.

Proofreading and culling in one fell swoop.

I sent it to my trusted beta readers, but they both have a lot of work themselves and I didn't want to push the issue. Honestly, I didn't want to send it to them at all until I'd had a proper shot at a first edit, but time... it's always about time.

Tentatively, I approached my editor Salomé Jones at Ghostwoods. Over the past year developing Rosy Hours together, she's become a friend as well as a colleague, but I didn't just want to assume she had time to look through my half-hashed efforts. I was delighted when she said that she would.

It's terrifying when you first show what you're working on to someone else. 50k into any story and you lose all sense of objectivity. Even my spell checker's given up on me. I know there's some stuff isn't quite right with this one, but I wasn't sure if it was 'just a bit off' or 'dear gods, my eyes are bleeding' bad.

You will hear time and time again that a good editor is worth their weight in gold. Gold, silver and rubies, my friends. The next day I got back the simple advice:

Cut the first chapter. Take the first two paragraphs and paste them to the start of the third (now the second) chapter.

Frowning like someone attempting a Rubik's Cube, I did as instructed.

It became a totally different story, and gained me that precious 1,000 words in the process.

Good editors have a special gift. It's not just about proofing and obsessive apostrophising - they have a deeply intuitive sense of story. Most writers have that too, but on a different level. Say a story is a block of marble. The writer brings that story to the table and carves out a picture, but an editor acts like the grit that polishes away until it sparkles. If you were to put that raw, unedited story in a museum next to a long line of other statues, people might look, they might remark, but they would soon move on. Put the polished version out there and people will look and see themselves reflected back.

The wonderful thing about a good editor is that they're a critic who's on your side. No punches pulled 'Salomé, is this boring?' - 'Yes' - 'Thanks, I thought so.' But the difference is, they've usually got a solution. I spend all my time writing my stories. I read other people's, but, other than a passing sense of professional admiration, I don't technically deconstruct them. Editors do - lots of stories, lots of genres, lots of authors. They have a lot of knowledge and experience to pass on.

Always test your editor. Not everyone who says 'I can edit' can. But when you find that good one, listen to everything they say. Don't swallow your gut instinct, don't be afraid to question, but watch, listen and learn. Accept that seeing your work lined through is going to come as a shock, then get over it.

Honestly 'lose a chapter and put this there' - transformational. Wouldn't have got there on my own.

The story might not get anywhere in the competition, but at least I know I put my best foot forward, and either way the first 15k of the novel looks a hell of a lot smarter.

I don't think they're currently accepting new editing clients at the moment, but I know Salomé works for Flourish. Worth enquiring if you're looking for an excellent editor.
at 15:55