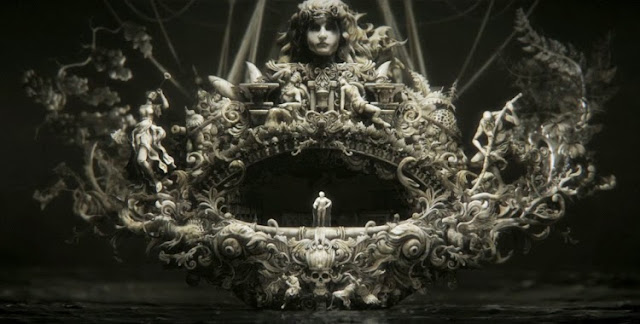 [UPDATE: I have completely revised my opinion on this - best thing since sliced bread. Complex exploration of sexuality on the high seas - aarrrr.]

Hmmm. Just started watching Black Sails. First heard about this when I started writing a pirate project of my own and was researching the period. Still can't decide if it's worth continuing my story since this came out, even my title was similar, but it's got a good IMDB rating which backs up my theory there's a market for buccaneering.

I wasn't completely enamoured. Some of the acting's a bit dodgy in the first few episodes, and it's not a fast-moving plot. Felt like a few things were thrown in just for effect. But once you're into it, it gets better and better. There was one aspect that really held my attention from the off.

This shouldn't sound so surprising, but to me it was. At least, to see it portrayed in such a way. Most of my favourite programs: Game of Thrones, The Borgias, Last Tango in Halifax, Lip Service - they have some element of bisexuality in there somewhere. It gives the impression that we see a lot of it on telly. But as far as women are concerned it's often a case of a woman transitioning from a straight relationship to a gay one (Last Tango, Imagine Me & You), or something that feels thrown in to tantalise, but isn't explicitly explored (Lip Service, Borgias (I always expect Vittoria to answer 'Bob' when asked her name)). Kitty Butler in Tipping the Velvet is the most complex I can think in memorable mainstream telly, outside of cult classics like Shortbus.

I honestly sat up in my chair. A rarity to see an in-your-face, unapologetic, understandable bisexual woman. Now there's someone I can identify with, I thought. Especially when she smacked the guy round the head for assaulting her girlfriend, having just climbed out of bed with her boyfriend. Made me chuckle.

Also made me realise how important it is for stories to reflect us - all of us. How we look for our own narrative in stories. Good stories offer up a smoky mirror, where our reflections shift and change and settle.

Most of the stuff in Black Sails is vivid, from the fights to the fucks. Not to everyone's taste, I'm sure. In that respect it made me reflect on the history of televised storytelling, and how it can slam through cultural norms as a powerful device for change. From Star Trek's first interracial kiss to the normality of watching wenches pleasure one another on GoT.  And one of my favourite of all the big screen gay tragedies Cloud Atlas - because no one, gay, straight or asexual, can fail to understand the depth of love behind that narrative. It hurts the heart whichever angle you approach it (even if the rest of the film leaves many scratching their heads.)

Stories are the medium through which we understand ourselves and empathise with others.

I look forward to the day when something like this doesn't make me sit up in my seat. When characters like Eleanor get more of an airing and cease to be such a rarity.

On another note, I also appreciate this drama for the cock shots. Hear me out here. I have no issue with nudity in films. What I have an issue with is that pretty much everything you see shows women completely naked: boobs, butt and in between. You seldom ever see male protagonists laid bare. Women are usually portrayed as more modest, more bashful, more virtuous and men more virile and sexual, yet when it comes to genitals, this doesn't match up on screen. It's hard not to wonder - if nudity is acceptable - why it's acceptable for women to show all, yet shots of men always stop above the waist or get artistically filmed from a concealing angle? I appreciate this series for being bold enough to break that taboo.

Definitely enjoying it now that I've got into it.