The Mystery of the Red Death 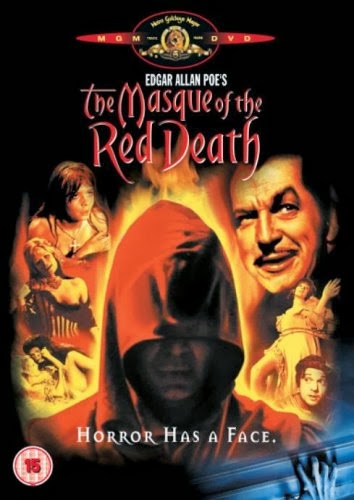 Well, that answers that then.

A couple of months back I read Masque of the Red Death by Poe, noting that it's one of the shortest short stories ever.

I discovered they made it into a film in 1964, staring Vincent Price.

My question was: how do you turn a ten page story into over an hour's worth of film?

You make up a completely different story!

Obvious when you think about it.

The story takes place at the castellated abbey of the "happy and dauntless and sagacious" Prince Prospero. Prospero and one thousand other nobles have taken refuge in this walled abbey to escape the Red Death, a terrible plague with gruesome symptoms that has swept over the land. Victims are overcome by convulsions and sweat blood. The plague is said to kill within half an hour. Prospero and his court are indifferent to the sufferings of the population at large. They intend to await the end of the plague in luxury and safety behind the walls of their secure refuge, having welded the doors shut.

One night, Prospero holds a masquerade ball to entertain his guests in seven colored rooms of the abbey. Each of the first six rooms is decorated and illuminated in a specific color: blue, purple, green, orange, white, and violet. The last room is decorated in black and is illuminated by a scarlet light, "a deep blood color". Because of this chilling pairing of colors, very few guests are brave enough to venture into the seventh room. The same room is the location of a large ebony clock that ominously clangs at each hour, upon which everyone stops talking or dancing and the orchestra stops playing. Once the chiming stops, everyone immediately resumes the masquerade. At the chiming of midnight, the revelers and Prospero notice a figure in a dark, blood-splattered robe resembling a funeral shroud. The figure's face resembles a mask that looks much like the rigid face of a corpse, and exhibits the traits of the Red Death. Gravely insulted, Prospero demands to know the identity of the mysterious guest so that they can hang him. The guests are too afraid to approach the figure, instead letting him pass through the seven chambers. The Prince pursues him with a drawn dagger until he is cornered in the seventh room. When the figure turns to face him, the Prince lets out a sharp cry and falls dead. The enraged and terrified revelers surge into the black room and forcibly remove the mask and robe, only to find to their horror that there is no solid form underneath. Only then do they realize that the figure is the Red Death itself, and all of the guests contract and succumb to the disease. The final line of the story sums up, "And Darkness and Decay and the Red Death held illimitable dominion over all."

As I mentioned before, that is the entirety of the plot.

A quick glance at the blurb on the back of the DVD gives fair warning of what goes wrong, and I don't just mean excessive use of exclamations:


Death and debauchery reign in the castle of Prince Prospero (Vincent Price), and when it reigns... it pours! Prospero has only one excuse for his diabolical deeds - the devil made him do it! But when a mysterious, uninvited guest crashes his pad during a masquerade ball, there'll be hell to pay as the party atmosphere turns into a danse macabre!

Stop me if I sound like an arse, but 'crashing' one's 'pad' when the 'party atmosphere' turns sour isn't exactly evocative of Poe's Gothic prose.

And, yes, you probably guessed right - they've made Prospero a satanist.

The whole story is about him selling his soul to the devil and getting his comeuppance from Death, who rules the universe with Satan.

Far from Red Death having no face at all, he's got Vincent Price's face, as has Prospero, which some bird called Francesca seems to fall in love with after he abducts her from a village and forces her to murder her own father. Absolutely none of which happens in the original story.

They didn't even put the clock in the right place. It was in the main hall, and it certainly wasn't carved from ebony, it was bright yellow. It bonged once, causing a moment's mild unease, before playing no further role. Yet it was pretty much the central key to the whole of Poe's story.

It was a very, very bizarre film.

I think, had it simply been a film in its own right, you probably could have grooved to that. There were some entertaining moments (and a lot of high-pitched women-in-distress-like-they-often-were-in-1960s-horror-films screaming), but it wasn't a film in its own right, it was a rip-off of a rather grand poet who probably spun so fast in his grave that he generated electricity. Just not enough to blow up the box office.

Whichever way you look at it, you have to admire that they took 2,500 words and turned them into one hour and twenty-five minutes' worth of film. It certainly took a lot of imagination - running rampant and wild - to fill in the time.

You can read the original as a PDF online, or if you're able to buy into the whole radical adaptation genre, perhaps try Bethany Griffin's 'sexy, post-Apocalyptic reimagining.'

Goddam it, I've seen it so I'm gonna have to buy it.

Mind you, Vincent Price aside, it wouldn't be the first time a reimagining of Red Death turned out kinda sexy. And, indeed, I can credit Gaston Leroux for granting me the initial impetus to read it. 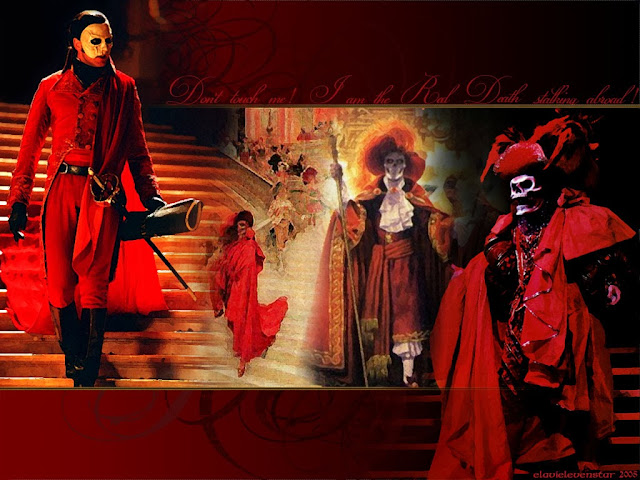