Equal of the Sun 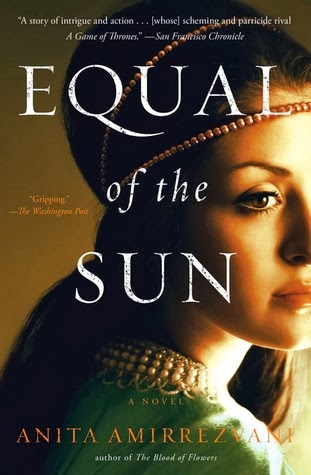 I finished reading this at 4am, which was not a strategic move given that I had to be up at 8am this morning to go to London.

The first thing I will mention about this book is the very first thing I noticed when it arrived: the cover is glorious. Yes, the picture is nice and it really does look like you imagine the main character to look, but it's the feel of the cover that's so special. It's like fine grain sand beneath your fingers. I'm not entirely sure what it's made of, but it induces a wonderfully tactile sense of location. Turns something otherwise ordinary into something quite extraordinary.

Iran in 1576 is a place of wealth and dazzling beauty. But when the Shah dies without having named an heir, the court is thrown into tumult. Princess Pari, the Shah’s daughter and protégée, knows more about the inner workings of the state than almost anyone, but her maneuvers to instill order after her father’s sudden death incite resentment and dissent. Pari and her closest adviser, Javaher, a eunuch able to navigate the harem as well as the world beyond the palace walls, possess an incredible tapestry of secrets that explode in a power struggle of epic proportions.

Legendary women—from Anne Boleyn to Queen Elizabeth I to Mary, Queen of Scots—changed the course of history in the royal courts of England. While they are celebrated, few people know of the powerful and charismatic women in the Muslim world. Based loosely on Princess Pari Khan Khanoom, Equal of the Sun is a riveting story of political intrigue that brings one extraordinary woman to light. Anita Amirrezvani is a master storyteller, and her lustrous prose brings to life this rich and labyrinthine world with a stunning cast of characters—passionate and brave men and women who defy or embrace their destiny in a Machiavellian game played by those who lust for power and will do anything to attain it.

How I came to discover this book is in itself somewhat of an intrigue. Those who have been following my Blood Rose saga, will know that the novel I am currently writing is also based in Iran and centres around the daughter of a Shah, all be it two-hundred and seventy years after the events of this story.

I hit a slight plot incident. One of the guards took advantage of a serving girl and wound up murdered. This meant that I needed to replace two guards. I realised that the guards couldn't just be men from the palace, not after what had just happened.

My mind turned to eunuchs. I began a Google search of the history and customs of eunuch guards in Iranian harems... which is how I found Equal of the Sun. Its author, Anita Amirrezvani, had written an article for Historical Tapestries titled: Why I Love to Write About Eunuchs. (Incidentally, I wrote one myself two months later titled: Why I Love to Write About Scratchy Records).

My little heart leapt! To find such a wonderful article on the exact subject I was wondering about, set in the exact same country under a similar regime - it was more than I could have hoped for. (Though perhaps not quite as uncanny as unearthing Society, Politics and Economics in Mazandaran, Iran 1848-1914, the exact province and period in history I am writing about - still, pretty amazing).

Once I knew of the existence of the book, I couldn't not order a copy. The big problem was whether to read it before or after I had completed my own novel? Everything in me wanted to dive beneath the pages and soak up the atmosphere of the age, but the jinn over my other shoulder kept whispering fears of plagiarism and unoriginality. As a writer, you want your story to be your own entirely, which can lead to a fear of being influenced by external sources, or being seen to be influenced by them. Which is ridiculous really, as every story you ever write will be drawn from something you've read, seen or heard somewhere along the line.

I worried over whether to read it for about a week. When I realised I hadn't written anything in that week because I was worrying about whether to read it, I gave in. After all, I read Somerset Maugham's Sanatorium several months after completing Angorichina and almost fell off my chair. If anything could ever get me falsely accused of plagiarism, it would have to be that. Things are either similar or they are not, and if they are similar they'll still be similar whether you read them or not. The degrees of separation between ideas are often fairly narrow, so why spend time paralysed by it when fresh stories wait to be written?

My desire to remain (as) original (as any author probably can be) was overwhelmed by my desire not to feel alone. It can be a bit isolating to venture out into history armed only with Wikipedia and a head full of misconceptions about how people might have lived. Although I've always embraced academic works, it felt a little bit like cheating to peek at someone else's fictitious interpretation of ancient Iran, to check whether I was on the right track.

There was a very real sense of relief to see reference to so many familiar things from my own story: the importance of the Shahnameh, Zahhak and Kaveh, the descriptions of food and beauty and excess, of musical instruments and board games, of sexual dynamics and the conduct of commoners.

Yet there was also enough difference. I learned new words, such as birooni, which I'd love to use, but won't, because I've already developed my own vocabulary around a need to describe a birooni without knowing there was a word for it. Our stories are both very different in pace, style and plot. So there really was nothing to fear in reading it, and everything to embrace in discovering that my imagination had not dropped me entirely on my arse.

Equal of the Sun is a fairly slow burner. It spends time setting the scene. Not so much happens until after halfway, but the prose are technically faultless so you don't notice the passage of pages, and when the action does take off it's riveting.

There was a particularly poetic line on page 277: "As I walked back to my quarters in the harsh morning sun, I felt as if my heart would shred with feeling, like a peony swirling its bloody skirts."

Another part that I thought very touching, at the end of Chapter Seven:

I thanked God for His protection and prayed for His judgement on my soul to be light. I asked Him to look kindly on me because I was a strange creature, one that he had not designed and perhaps did not continence. Feeling the caress of the tablet of dried earth against my forehead, I prayed for the tenderness and mercy that He showed all his creatures, even the most humble

In the bazaar there were always strange creatures like the one-eyed goat that were derided and jeered at, yet I always tried to stroke their noses for a moment or two, because how could they have come to be, without God's hand? Soldiers returned from wars with missing parts - limbs torn off or eyes gouged out. The old lost the powers they had had as youths, becoming as gnarled as branches and as sedentary as trees. My mother developed a fissure in her heart and was felled by sorrow. God had created perfection in man, but time on earth ate away at him, part by part, until finally nothing remained and he vanished into spirit. Yet there was glory in being half, not whole, glory in the task of it. I thought of a blind man who had recited poetry at court and how he cried out the lines of the Shahnameh as if they were seared into his heart, as if the loss of his eyes had allowed him to see more clearly into the soul of the words. He spoke true, truer than a man with eyes could ever speak, and he cracked open the hearts of those who heard his call.

And, finally, this last bit felt particularly poignant, perhaps because Nelson Mandela had just died, and he had been likened to Gandhi, Jesus, and probably even Buddha. It is the narrator of the story, Javaher, dreaming about a great revolutionary warrior, Kaveh, who overthrew an unjust tyrant:

That night, I had a dream I will never forget. It was as if the Shahnameh had come to life and swept me into its stories. The blacksmith Kaveh appeared at my door and asked me to join him on a mission. His face was ruddy from the forge, his forearms as strong as steel. Together we stormed Zahhak's palace, and Kaveh shredded his lying proclamation before his eyes. At the city square, Kaveh lifted his leather apron on the point of a spear and rallied the people against the evil leader. I marched with him, my heart bursting with pride.
"Long live Kaveh!" I chanted. "Death to the tyrant!"
The crowd swelled and yelled, their cheers like thunder. Surely our liberation was at hand! But when the cheers were at their loudest, Kaveh turned toward me.
"I am born in every generation," he whispered. "I protest and die, but still the tyrants prevail."
His black hair was flecked with gray, his leathery face creased with worry. I could not believe that he looked so despondent, and I was stricken with dread.
"How much longer must we endure injustice?" I asked.
But even Kaveh had no answer.


It just seemed to strike a chord, with the booing of Jacob Zuma, after all that could be achieved. There is much in the book that speaks of oppressive regimes, careless of the well-being of those weaker and less fortunate, and that last bit really stirred a sense of injustice, be it against a Shah or the corrupt Western political powers. Perhaps Kaveh was right, perhaps the tyrants prevail in every generation, and will continue to do so in generations to come?

Thank you Anita Amirrezvani for that disturbing thought.