Austen for a Tenner 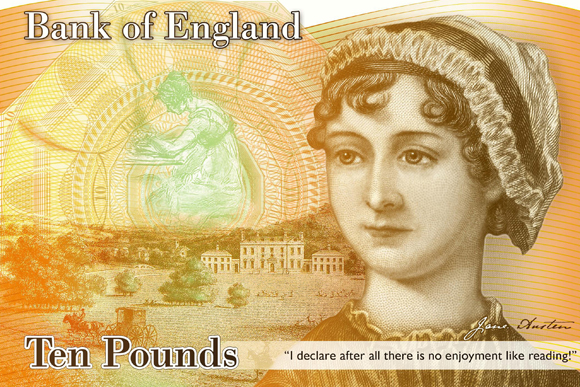 Readers outside the UK might be unaware that we Brits have recently been having a bit of a hoo-ha over our bank notes. There was a huge outcry when the Bank of England proposed removing Elizabeth Fry from the £5 note. Elizabeth Fry's claim to fame is that she championed prison reform. She is also the only woman, other than the Queen, to appear on a British bank note.

The proposal to replace her with Sir Winston Churchill met with huge objection, and a petition to 'keep a woman on English bank notes.'

This has since led to a huge amount of debate over which particular woman to include. Everyone seems united that Mrs. Fry has served her time, but who should take her place? A family planning crusader, such as Marie Stopes? Pioneering aviator, Amy Johnson? How about mathematician, Ada Lovelace?

Whereas, from a literary perspective, I'm rather entertained by the fact Jane Austen seems to be winning the popular vote, I can't help thinking that perhaps we've missed the point. There are so many talented women who changed history. Why do we act as though we've been rewarded by the Bank of England when they say 'oh, okay then, we'll allow you a woman - but just the one'?

Rather than turning it into a competition, how about we have two or three women on bank notes? How about something completely revolutionary: a 50/50 gender equal split? #justsaying
at 20:52