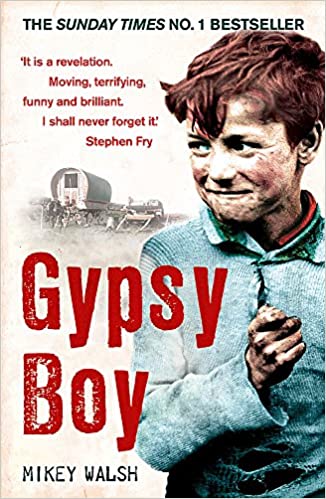 This is an absolutely stellar biography.

MIKEY WAS BORN into a Romany Gypsy family. They live in a closeted community, and little is known about their way of life. After centuries of persecution Gypsies are wary of outsiders and if you choose to leave you can never come back. This is something Mikey knows only too well. Growing up, he rarely went to school, and seldom mixed with non-Gypsies. The caravan and camp were his world.

But although Mikey inherited a vibrant and loyal culture, his family's legacy was bittersweet with a hidden history of grief and abuse. Eventually Mikey was forced to make an agonising decision - to stay and keep secrets, or escape and find somewhere he could truly belong.

Apparently, it was "...the first commercial memoir written by someone on the inside of the notoriously secretive culture of the Romany Gypsies." If you get the audiobook he narrates it himself and I was impressed he managed to remain so steady whilst reading parts.

I recently watched the Netflix documentary One of Us about the Hasidic Jewish community, and there were some similar undertones, especially when it comes to male control, domestic violence and extreme homophobia.

Of course, I was curious about the mystical side of things. Massive Peaky Blinders fan and have a close friend who occasionally used to talk about his grandfather being Romany. It was interesting to read that many Romanies don't believe in an afterlife nowadays and that:

Gypsy women were not allowed to work outside the home, the only exceptions being the handful that occasionally sold trinkets and told fortunes. Gypsies are very superstitious people. Black cats are often seen as a good sign, as are horseshoes, and even Dalmatian dogs, as long as you can spit on both hands and rub them together before you lose sight of one. They are also certain that if a bird flies into your home, someone is about to die. But, contrary to popular belief, they don't believe in magic, and the Gypsy curse is no more than an age-old way of scaring non-gypsies into buying something. I have run into many people who have asked me to remove a curse placed on them by a Gypsy, because tradition says that it can only be removed by another Gypsy. Of course, I oblige. I may not believe in curses, but the poor people who have suffered at the hands of some old Gypsy woman often do.

And there were some interesting rules relating to women, such as being expected to marry before the age of eighteen, allowed to date from the age of fourteen, but no more than four suitors before choosing a husband, and that they are not supposed to wash their hair or speak to men whilst menstruating. So many cultures around the world get squeamish about women's menstruation. You can't step into a Jain temple if you're bleeding, some places in India make women sleep in a hut in the garden during that time of the month, and so on.

He also goes on to speak a lot about the sexual, mental and physical abuse he suffered growing up and it was fairly horrifying at times to realise how easily this sort of abuse goes undetected or covered up and wasn't addressed within the school system. You just want to pull him out of the pages and give him a big hug.