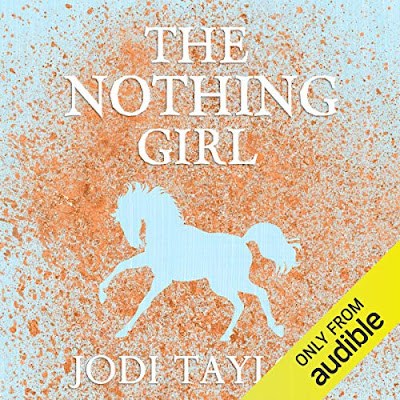 Picked this up in a massive promotional haul from Audible. I was reading through the blurbs and it intrigued me:

Getting a life isn't always easy. And hanging on to it is even harder...

Known as 'The Nothing Girl' because of her severe stutter and chronically low self-confidence, Jenny Dove is only just prevented from ending it all by the sudden appearance of Thomas, a mystical golden horse only she can see. Under his guidance, Jenny unexpectedly acquires a husband - the charming and chaotic Russell Checkland - and for her, nothing will ever be the same again.

With over-protective relatives on one hand and the world's most erratic spouse on the other, Jenny needs to become Someone. And fast!

It was the bit about the golden horse which piqued my interest. It just sounded rather unlike anything I'd read recently. Plus, the cover is very nice.

This one took a little bit of getting into for me. Mostly because I don't suffer from a lack of confidence, so it was hard to warm to the character initially. I was more of the Russell Checkland camp of 'get a grip.' I'm also not really a major romance fan and, although it was a melange of mystery and romance, it was very much the latter by the end. I think the only contemporary romantic novel I ever kept on my shelf was Chloe by Freya North. I just really liked that book, though I can't place exactly what it was about it. Must have been Mr. and Mrs. Andrews.

As with Chloe, this one was very quintessentially British in its delivery, and narration. It's a book where desirable women are beautiful and slim, men call their wives 'wife', and all that rather heteronormative stuff that goes on in mainstream romance. It's definitely not bad, it just isn't me.

On the upside, Jenny is a strong character, there's a poisoning plot and a donkey.

It's sometimes good to read things you wouldn't normally, because stories can surprise you, and I ended up enjoying this a lot more than I thought I would at the start. Listened to it for about four hours straight on a bus up to Gisenyi the other week.

I think if you like quirky, British romance with a twist of mild peril, this may well be for you.
at 20:59