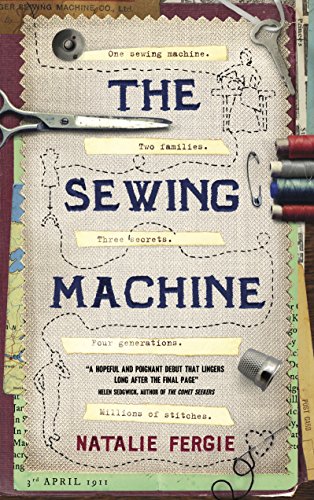 It is 1911, and Jean is about to join the mass strike at the Singer factory. For her, nothing will be the same again.

Decades later, in Edinburgh, Connie sews coded moments of her life into a notebook, as her mother did before her.

More than 100 years after his grandmother’s sewing machine was made, Fred discovers a treasure trove of documents. His family history is laid out before him in a patchwork of unfamiliar handwriting and colourful seams.

He starts to unpick the secrets of four generations, one stitch at a time.

A very gentle story, interweaving (or sewing), several lifetimes together. The focus is on sewing and the place it held in people's lives, both as a source of income and for pleasure. It was the kind of story I could see Mikron Theatre performing, as there was a socialist slant towards the formation of the unions in Scotland.

I listened on audible. It was the first time I'd heard both a male and a female narrator on the same book. An interesting idea. I've been out of the UK for some time now and struggled a bit with the prologue, which sounded to me as though it was delivered faster and with less inflection than the rest of the story, but once it got going it was much easier to keep pace with, though I think a second-language English speaker might struggle. The narrators' accents are pretty heavy.

It was enjoyable though, and a few poignant moments involving powder presses and steps. It reminded me of After the Lie, in that it's a family-oriented drama looking at how the past affects the future. One for people with an affinity for sewing.