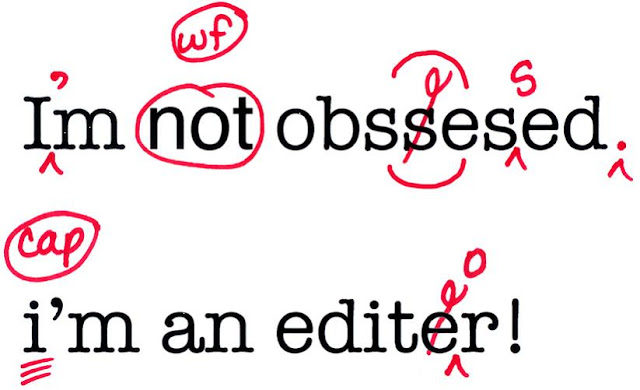 Well, my own editing isn't going very well at the moment, as I took another proofing job. I'll get back to my own stuff once that's done, but I thought I'd fill some whitespace with a few tips from the writing course I teach in Kigali. Hopefully it might help others who are going through the editing process.

As writers, we all start in the beginning... repeating many of the mistakes and foibles of every other writer who has gone before us. It takes years to get good at what we do. I've spoken in the past of my backlist shame. When I edit, proofread and teach, I notice the same issues cropping up over and over.

In this post, I've plucked the three big ones that tend to turn great writing into average writing. There's a little exercise at the end to practise on.

The aim is to produce concise, clear prose which make the story effortless for your reader, allowing them to lose themselves in the plot.

We all think we know when we're stating the obvious, but it's actually really easy to miss because daily language is saturated with obvious phrases:

It was a dark night (well, duh)
He shouted loudly (by definition)
She cried salty tears (or milk - milk would be cooler)
She sat down on the chair (she didn't levitate? How disappointing)

These are the sort of things we just say automatically. That's fine, but when we start to write things down, space becomes precious. A good novel should be filled with wonderful words and interesting curiosities. Don't waste space on blanks that most readers could fill in for themselves.

If the woman sat cross-legged on the grass, braiding daises, sure, tell me about it, or if the chair happened to be one of those high-backed, Gothic jobbies carved out of bone - that, I'd want to know about. But just a mundane chair? Get on with the conversation she's having, or the deep gnawing inner guilt which threatens to destroy her entire sense of self-worth.

Think of the obvious like eyebrow hair. Take a pair of tweezers and comb through your manuscript, plucking it out. It really hurts at first, because you feel that without those obvious phrases, there won't be enough of a sentence left. It was dark, he shouted, she cried and she sat may be a lot shorter, but length isn't the worth of a work.

Now add the things we can't guess for ourselves.

I don't need to bang on about this, many more famous writers already have. Mark Twain really put it well:

When you catch an adjective, kill it. No, I don’t mean utterly, but kill most of them — then the rest will be valuable. They weaken when close together. They give strength when they are wide apart.

This is really the essence of it. The shorter a sentence, the more punch it packs. Each adjective weakens the blow.

I won't go on about it, but my rule of thumb is: try your hardest to pick one, never more than two.

Like obvious things, there's a little panic button goes off in the back of a writer's mind as they start to trim back a sentence: will it be sufficient, substantial, meaningful, if it's short?

Yes. Yes it will. Things will flow, meaning will be had, life will be good.

Save your manuscript to a test file and try it. Go through, reduce all adjectives to no more than two at the absolute most. Choose the adjectives that don't say anything obvious or inconsequential. Only go for the ones that tell the reader something they couldn't otherwise guess, or that they might find particularly interesting, or the ones that sound pretty or alliterate (usually the same thing).

Go to town. Don't hold back.

Only judge at the end.

The joining words, though I like to extend it to longer words if they carry little meaning.

In the first draft of anything, we use too many of them.

Good writing is like wine - potent. Each little word is a drop of water to that wine. Whilst editing, you're looking to remove the water and distill an excellent vintage.

It's all about tightening up your prose.

It wasn't long before the doorbell rang. With a sigh, Emma pulled herself from the sofa and went into the hall to open the door. Outside in the street it was looking overcast. It would probably rain within an hour or maybe two. For now, she had to deal with the man who was standing in front of her.

Makes for much better reading after you cull the little words:

The doorbell rang. With a sigh, Emma pulled herself from the sofa and went to answer. Outside was overcast. It would probably rain in an hour or two. For now, she had to deal with the man in front of her.

Nothing I chopped out of that leaves anything unsaid. It's just taken us from point A (on the sofa) to point B (stranger at door) much faster, reserving words for interesting things like secret government agents, an estranged father she hasn't seen in years, or an alien invasion.

It's in Word format, so you should be able to edit to your heart's content.

See how much better those stories read?

Email ThisBlogThis!Share to TwitterShare to FacebookShare to Pinterest
Labels: writing101