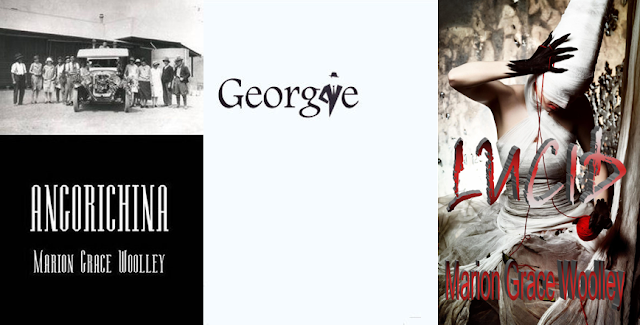 I was doing a signing recently to promote Rosy Hours. It was a really lovely night. Met lots of nice book enthusiasts, sold several copies of the book I was promoting, and helped spread enthusiasm for 1850s Northern Iran.

Alongside Rosy Hours, I laid out a couple of copies of my backlist.

The first novel I ever wrote was Lucid. I started writing it around 2008, just to prove I could reach that number of words. It was shortlisted for the Luke Bitmead Bursary for New Writers in 2009, about a week before I returned to the UK from Africa. I was living in Rwanda, and the lack of TV, radio and other distractions was one of the reasons I started writing a novel. Rwanda has always been an extremely productive place for me writing-wise.

The Luke Bitmead Award is based on an unpublished work. So, spurred on by this achievement, I decided to have a go at writing a book that would get published. I'd always been fascinated by a place called Angorichina (Ango-reach-na) in South Australia. I'd been there in 2004, passing through on a tour of the Red Centre. It's a back packers' hostel now, but was once a TB sanatorium, and it haunted my thoughts ever since.

I'd been struggling with Ango. It's a story I'd wanted to tell for a long time, but just couldn't get it to come out right. Then, one night I switched to first person and suddenly it fell into place. Four characters: Charlotte, Heath, Joe and Sean just appeared, fully formed, and the story fell out of me.

Ango was indeed the first to get published. Picked up by Green Sunset Books. They didn't want Lucid, as they said it was a bit dark for their tastes, but that got accepted by Netherworld Books, and in the same month Green Sunset published Georg[i]e, a transgender romance that I'd written because the character appealed to me.

I'd completed Georg[i]e and made Lucid print-ready whilst on a writing retreat in Germany. Getting my first publishing contract had been a real buzz, but the buzz does wear off when you're left without a marketing budget. Netherworld didn't have an editor. They were going to publish the manuscript as is, until I vetoed that and went and found my own proofreader. Now they just send me a list of 'How to promote yourself' ideas via e-mail with the quarterly statements.

Green Sunset put a lot more effort into things. They really worked on my manuscripts to polish them up, but similarly there was no budget for marketing and no real networking connections to help get the books out there.

At the time, I was a bit disappointed. I had that new-author dewy-eyed glow we all get. I'd hoped the books would do better.

For three years after Georg[i]e, I wrote very little. A few short pieces for competitions, some of which did well, others not, and a collection of short stories called Splintered Door which I've since made available free as a website.

Writing a novel takes a long time, and I was deflated. The thought of working that hard for something nobody was ever likely to read really irked me. But writers can't give up writing forever. Eventually the next idea comes along and, out of sheer compulsion, we set to.

I knew something was different the moment I started on Rosy Hours. As I mentioned on Chuck Wendig's blog, you know when you come of age. Like anything, writing takes a long time to get good at. Those first three novels, and the short stories, were my getting good phase. Rosy Hours was my optimum exemplum.

I have a great deal of admiration - and gratitude - for Ghostwoods Books. They edited and proofed that manuscript with great attention to detail. The cover is gorgeous, the layout is equally as gorgeous, from the font to the section dividers. It is a book that I am very proud to hold up and say 'I wrote this'. Not only did I write it, but for the first time people are reading it. It's out there in paperback, ebook and audiobook. It's getting reviews. It's getting coverage.

Perhaps because of this, I wince a little at my backlist.

I put it out on display alongside Rosy Hours, but I no longer go out of my way to push those books, and when my mother (bless 'er soul) starts to speak of them to friends, I do try to guide them towards Rosy Hours.

I usually start by saying 'It's not that I'm ashamed of my earlier works' - but, truthfully, perhaps I am a little bit. It's not the stories. I stand by the strength of each story - they are good stories, solidly told. But I wince a little at the presentation. The littering of semi-colons that should not be there. The surplus ellipses. The glaring homonymic slips that no editor picked up, and which I'm too embarrassed even to give an example of. My solace is that it would have been ten times worse for Lucid if I hadn't insisted on getting it checked.

We're perfectionists, authors, on the whole. Always looking to tell the perfect story.

Of course I'd love to re-edit those works, given the chance. Have the covers redesigned. Make them beautiful. But even with the best editor and the most skilled cover designer, I know they still wouldn't be of the same calibre as Rosy Hours. In the same way that your A-level art folder would never gain you a Master's in Fine Art. Time and experience hone your skills. You always learn new tricks, you always grow, but I can't see myself ever looking back on Rosy Hours with the same inner-wince that I get when I look back on earlier work. Future work will be a lot more like Rosy Hours than Rosy Hours is like past work. I've reached a level where I know what each of the tools in my toolbox does, and I'm confident of using them.

So, it was a bit of a shocker when someone at the talk decided to purchase my entire backlist. As he handed over the money, I think I may have uttered Are you sure?

I went home and had a flick through them myself, as a reminder. They're certainly not bad first attempts. I'm glad those stories live. I can't say otherwise, it would be like infanticide to kill off the spirit of a book in that way. It is good that they exist.

But I would urge new writers to think carefully. Self-publishing has never been easier: paperback, ebook, blogs. You can get your work out there at the click of a button. But once it's out there, it's out there. Are you sure it's ready?

It worries me a little that people might read those early works and, skipping over the verso as wont we are to do, assume that is where I am now as a writer.

There is nothing else for it but to continue writing.

To write more. To write better. 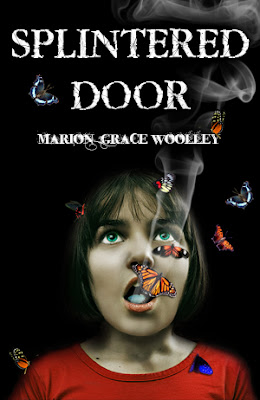