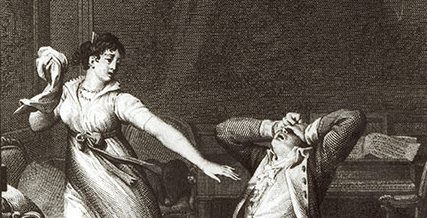 Can't beat a bit of moral panic. I was fascinated by this article on History Today, tweeted by @GearBooks. It talks about The Sorrows of Young Werther, which, in the mid-1700s, caused sensationalist panic across the modern world for encouraging young people to read...

When cultural commentators lament the decline of the habit of reading books, it is difficult to imagine that back in the 18th century many prominent voices were concerned about the threat posed by people reading too much. A dangerous disease appeared to afflict the young, which some diagnosed as reading addiction and others as reading rage, reading fever, reading mania or reading lust. Throughout Europe reports circulated about the outbreak of what was described as an epidemic of reading.

In November 1784, five years after the publication of the English translation of Werther, the Gentleman’s Magazine published the following notice under its obituary:

Suddenly at the Chaceside, Southgate, Miss Glover, daughter of the late Mr.G., formerly an eminent dancing master. The Sorrows of Werther were found under her pillow...

Needless to say, I've downloaded a copy to Kindle.

Just for kicks, I thought I might read it whilst playing Call of Duty and listening to Marilyn Manson's latest album.