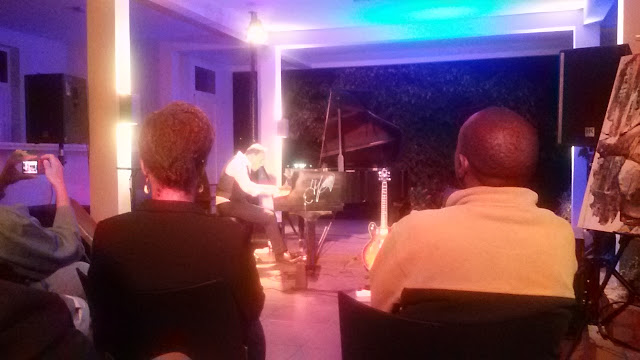 Went to a fabulous jazz concert at the Belgian Ambassador's residence on Monday night. It turns out the guys we went gorilla trekking with were musician Jef Neve and his crew. They were playing one final gig before flying home to Belgium that night.

They mentioned the gig on the way back down the mountain, and Jo, Maia and myself couldn't resist. We got a shout out as he walked on stage, just before he sat down and did this!

We were utterly amazed, and rather grateful the silverback stopped when it did. Gorillas and muddy slopes could have been quite a risk to his repertoire.

They'd just got back from Lake Kivu and Jef played a song named after it, which he'd composed on the road. Hope he records that online, it was really beautiful. I was particularly impressed to read on the poster that he plays with Cécile Kayirebwa, a renowned Rwandan musician resident in Belgium. If you don't know her work, check out Indamukanyo and Urubamby'Ingwe.

Jef introduced a couple of local musicians who accompanied him. One was Deo Muyakazi, who is a really talented Inanga player, the traditional harp of Rwanda. It had been specially adapted to plug into an amp.


Later in the evening there was a wonderful blend of piano, guitar and inanga. Something perhaps not heard anywhere else in the world?