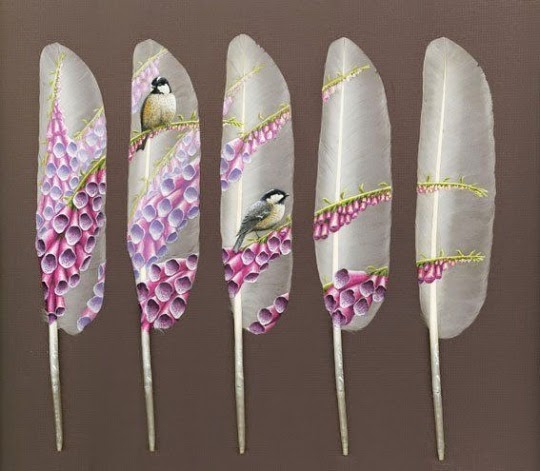 How beautiful are these? Paintings on Swan Feathers by Ian Davie. So delicate.

I am slowly resuming my swan obsession, having been on a two week bender. I didn't want to drink, smoke and party, I'll have you know, but friends came - what can you do?

Anyway, I'm just about human again and stuck indoors due to the rain. I hate coming back to writing after an unplanned pause. I feel a little dislocated, as though I don't know my own characters. It's like walking into a party and everyone turning to stare at you.

I'm finding refuge in a character that's surprised me. I thought I'd better write him in, but I wasn't expecting to find him so interesting. He's become a conduit for my inner 'wise child' - the one that gets overlooked by all the adults but silently understands exactly what's going on.

Hoping to break the 20k mark by the end of the day, which puts this firmly in the 'going to be a novel' category of my golden numbers. After the recent mayhem, I'm too weak and feeble to leave the desk, so I should really attempt something more constructive than Twitter for the next couple of hours.

Also quit smoking and coffee a couple of days ago. Trying to detox. Weirdly, after almost a 20-a-day habit for the past month, I don't feel any cravings when I go cold turkey. Though I did get a parcel from Blighty the other day and I'm substituting chocolate for cigarettes, so should probably also attempt some exercise when my strength returns. Or maybe I'll try writing standing up again, which lasted all of about four hours.

I fluctuate between caffeine-drenched slob and jogging-on-the-spot maniac quite often. I seem to be fairly happy in either state, like water as a liquid or a solid. There's someone I've got my eye on at the moment, so trying to lose my pudding pouch before introducing myself. I'm a little out of practise and need the body confidence to say 'hi'.

I am being pushed by my publisher to be a little more personal on this blog and on social media. Fairly sure they're going to regret that request. I used to have a tell-all blog (The Pineal Void - anyone remember that?), just like I used to have piercings, before I started pretending to be an adult. What the hay, perhaps not-so-tightly-censored honesty is the best policy? I suppose I am the CEO of my company, I can always reprimand myself.

Enough waffle, back to picking over the pages of my work-in-progress, in the hopes it might progress a little further.
at 20:54