The Brain: The Story of You 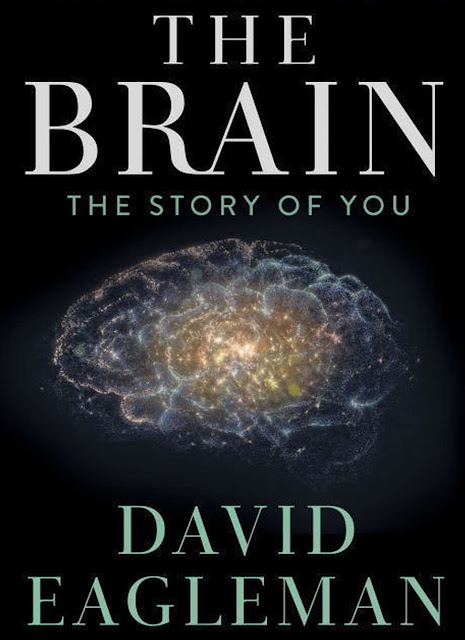 Delved into this the other day. Very interesting information, but found the narration a bit hard going. I went from Jonathan Keeble, who has a calm, steady voice that treats you as an intellectual equal, to David Eagleman, who is a fascinating neuroscientist, but does rather treat every sentence as though it ends in an exclamation mark. The enthusiasm is endearing, until he gets onto the topic of tortured kittens in lab experiments and children abandoned in Eastern European orphanages. Then it just starts to sound a little strange.

Anyway. Just part of my neurological idiolect, the tangle of synapses that make me who I am and determine my likes and dislikes.

Some of my top discoveries from this one:

On the topic of elderly couples resembling each other. I've always known that we mirror other people's body language, but apparently we also mirror facial expression, so subtly that we often don't realise we're doing it. So, if someone smiles or frowns, the muscles in our own face try on the expression for size, to get a better reading of what it means. Elderly couples have been mirroring each other so long that the lines in their faces start to develop in the same place.

There was also a really interesting part dedicated to genocide and what goes wrong in the human brain to allow for the breakdown of empathy, which is usually very strong in people as a species. The issue was described by neurosurgeon Itzhak Fried in 1997 as Syndrome E. Living in Rwanda, and having visited Auschwitz, Belsen, Hungary and Armenia, it's a topic that always rolls around at the back of my mind. This was a very informative section, looking at how the brain succumbs to cognitive fracture, compartmentalising actions, emotions and ideation. There's an excellent article here.

The book was full of quirky, and often more light-hearted, examples of weird things we do when we think we're in control of our actions, but when the brain actually takes over. It also dives into the question of reality and whether it actually exists. All the fun stuff, and nice and bite-sized. About six hours to History of Western Philosophy's thirty-eight.