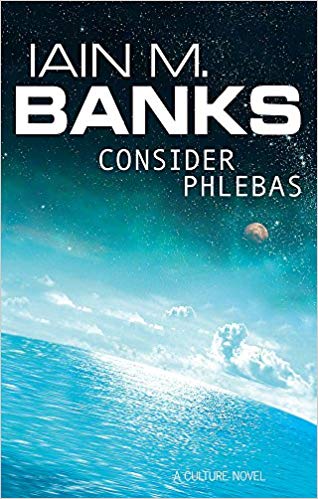 I really enjoyed The Wasp Factory. When I read it, I assumed it would be sci-fi as I knew that's what Iain Banks was best known for, so I was surprised it was horror. Thought it was excellent, so decided I'd also check out his sci-fi and picked up Consider Phlebas.

I have to say, this one wasn't really my thing. It falls into the category of space opera, which isn't a genre I'm that into. I like Star Trek a lot, but that's about my limit. So, this is just to say, it wasn't for me, but that's not to say it isn't for someone else. When I mentioned I was reading it, friends told me they really enjoyed it.

The first book in Iain M. Banks's seminal science fiction series, The Culture. Consider Phlebas introduces readers to the utopian conglomeration of human and alien races that explores the nature of war, morality, and the limitless bounds of mankind's imagination.

The war raged across the galaxy. Billions had died, billions more were doomed. Moons, planets, the very stars themselves, faced destruction, cold-blooded, brutal, and worse, random. The Idirans fought for their Faith; the Culture for its moral right to exist. Principles were at stake. There could be no surrender.

Within the cosmic conflict, an individual crusade. Deep within a fabled labyrinth on a barren world, a Planet of the Dead proscribed to mortals, lay a fugitive Mind. Both the Culture and the Idirans sought it. It was the fate of Horza, the Changer, and his motley crew of unpredictable mercenaries, human and machine, actually to find it, and with it their own destruction.

There was definitely some very good imagery, such as phaser blasts bouncing off a crystal temple, the guy who jumped the barrier without an anti-gravity unit, and the cannibal, Fwi-Song, is also very memorable, plus some nice lines:

Still, the underlying point held. Experience, as well as common sense, indicated that the most reliable method of avoiding self-extinction was not to equip oneself with the means to accomplish it in the first place.

I had to smile at one point when Banks seemed to let slip something of himself. The father in The Wasp Factory is obsessed with measurements and exact conversions. There's a point in this novel where a computer starts calculating how many two-millimetre characters could fit onto a piece of card 10x10 cm,  if writing on both sides, and how many cards total you could stuff into a draw one metre long. A conundrum that would have been at home in The Wasp Factory.

There's also a nice point of security logic. The main character, Horza, is a changeling (think Odo in Deep Space Nine and you're not far off). He takes the form of a ship's captain and logs into the controls. Banks explains that some ship's identity software looks for signs of relief after someone successfully logs in, as an indication of fraud. That could be useful for a lot of things. An I-got-away-with-it detection program.

So, it was interesting in parts, but the story just didn't pull me under. Glad I checked it out, though. Proved Banks to be a diverse writer, and Peter Kenny is an exceptional narrator.

I think there are ten books in the Culture series. You can find out more about them here. Apparently Amazon bought the rights to Consider Phlebas last year, so there might be a film adaptation on its way.
at 20:26