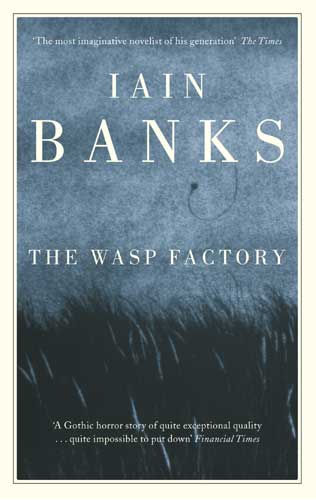 I've been meaning to read Iain Banks for a couple of years. A Scottish giant of literature, I wasn't sure where to start, but my friend suggested The Wasp Factory as a good stand-alone. Unfortunately he died in 2013, but there's a lovely interview with him here.

Q: When you're writing about dark material, is it in any way strange writing in the first person?

A: Not really, no. It's a technique you get used to as a writer, you know? You don't really think about it, you just get on with it. It's an answer to a technical problem, if you like, and so it's something you adopt quite naturally and easily. It has no real bearing on your own psyche.

Q: I know when you ask an actor 'are you a baddie in real life?', of course they're not baddies in real life, but, as I say, there's some dark stuff. Where does that come from? What do you draw on?

A: I don't know, I've just got an overactive imagination gland or something... It's just something I seem to be able to tap. I'm actually quite a nice, bright and breezy person.

He's most well-known for science fiction, but The Wasp Factory is horror. Again, I listened to the audiobook. I've realised with audiobooks that it's a bit annoying that you're not too sure how long the book is. I didn't look at the length on the timer whilst listening, and whereas most full-length novels run to around 13-18 hours of audio, this was only about six.

I think I might have enjoyed holding the book in my hands more, as it would have prepared me for 'right, now the end is on its way,' whereas it felt the audio finished very suddenly. I was really getting into it.

What I liked about this one, is that it left me rather conflicted. That's something very rare for me with books, usually I know very clearly how I feel about a work, and I do really wish I had a written copy in front of me so that I could look more closely at the writing style. Audiobooks really are a different kettle of fish, and I'll talk more about that in a separate post.

The thing that conflicted me was the extreme violence towards animals.

I need to explain this carefully.

I personally found it difficult - but I enjoyed that difficulty.

I can't stand reviews of my own books where people go 'It was a horrible book, it had rape in it.' It's a story, that's a plot, nasty shit happens and the best stories - for me - examine how we react to nasty shit, what causes it, what the implications are, and how people cope. For me, it's about intensity of emotion and experience. The extremities of human experience. I like those sort of stories. I like to write them and I like to read them. Not the only thing I like to write or read - or watch - I love horror, but I'll still enjoy Pretty Woman. Yet, for me, graphic brutality in itself does not make a bad book. Bad writing makes a bad book.

Banks's writing is excellent. His characterisation is delicious. Can't-turn-away train wreck stuff. But the animal cruelty - the rabbits, the one-eyed dog, the sheep - is graphic. Absolutely incredible storytelling, but puts it in the extremely rare category of book where I had to force myself to go on.

I tried to work out why I had that reaction. Partly, as a writer, I can't shake the deep sense that writing is a form of sorcery and, somewhere out there on another plain, you've actually created something real. Characters that live through a moment over and over. Now, I know this is absolute bollocks, but you keep thinking on it because it's the worst possible thing that could ever be true. It's why the concept of hell and Sisyphus are so popular. Death isn't the worst thing that could happen to you, being tortured for all eternity is.

So, to create a character that is born purely to suffer is uncomfortable in itself, but for those characters to be animals, and to portray them so vividly as we know animals to be: small creatures at the mercy of human will. It hits a nerve. And that nerve wouldn't be hit if he hadn't written it so very well.

Which is why, if someone hates your book because you made them feel something - you've actually done a good job.

So, hats off completely, it's an excellent book, and the reason I know that is because it made me squirm.

Again, I think this is a book where the written version is a better idea than the audio. The narrator, Peter Kenny, was excellent. Can't fault his delivery, but he characterised it so well that I knew exactly what the twist was from the beginning. Something about the quality of his voice gave it away. I think, if I'd been reading it, I would have been more willing to follow the author's deception and believe the writer until he was ready to reveal. Or maybe I just think about story construction so much that I would have seen it coming anyway. Maybe you were supposed to by the way it's written, but I can't tell, because I wasn't reading it.

Anyway. My friend was right. If you don't know Iain [M] Banks and you enjoy very dark literature, this is an excellent introductory stand-alone. Will check out his sci-fi at some point.