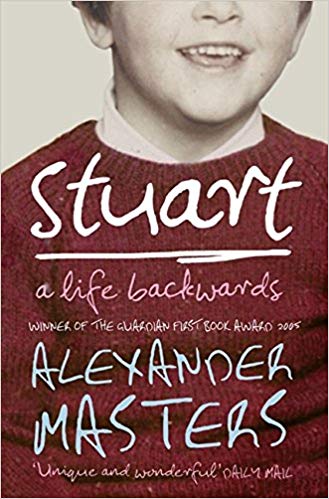 Whilst in the UK last July, I was talking books with Aunty Patsy. We were talking about what we were reading, and she brought up a book called Stuart: A Life Backwards. She spoke of it in such high terms that I promptly bought a copy for Kindle and started reading it on the flight home.

I got through 30% on that flight, then readjustments to daily life took over, and I've just finished it now.

It's an extremely important book:


‘Stuart does not like the manuscript. He’s after a bestseller, “like what Tom Clancy writes”. “But you are not an assassin trying to frazzle the president with anthrax bombs,” I point out. You are an ex-homeless, ex-junkie psychopath, I do not add.’

This is the story of a remarkable friendship between a reclusive writer (‘a middle-class scum ponce, if you want to be honest about it, Alexander’), and Stuart Shorter, a homeless, knife-wielding thief. Told backwards – Stuart’s idea – it starts with a deeply troubled thirty-two-year-old and ends with a ‘happy-go-lucky little boy’ of twelve. This brilliant biography, winner of the Guardian First Book Award, presents a humbling portrait of homeless life, and is as extraordinary and unexpected as the man it describes.

It isn't too often that you find yourself reading biographies about people who are not A-list celebrities or important historical figures. It's a book about a man you might find in a doorway in any British city.

There are numerous types of homeless person:

There are those who were doing all right beforehand, but have suffered a temporary setback because their wife has run off with another man (or, surprisingly often, another woman). Their business may have collapsed. Their daughter has been killed in a car crash. Or both. Self-confidence is their main problem and, if the professionals can get hold of them in the first few months, they'll be back at work or at least in settled, long-term accommodation within a year or two.

Right at the bottom of this abnormal heap are the people such as Stuart, the 'chaotic' homeless. The chaotic ('kai-yo-ic', as Stuart calls them, drawing out the syllables around his tongue like chewing gum) are beyond repair. When Stuart was first discovered, Kaspar Hauser-like, crouched on the lowest subterranean floor of a multi-storey car park, the regular homeless wanted nothing to do with him. They called him 'Knife Man Dan' and 'that mad bastard on Level D'.

What unites the chaotic is the confusion of their days. Cause and effect are not connected in the usual way. Beyond their own governance, let alone within grasps of ours, they are constantly on the brink of raring up or breaking down. Charity staff fuss especially hard over these people because they are the worst face of homelessness and, when not the most hateful, the most pitiable extremity of street life. - Full Guardian Article

Harrowing and honest. It gives an insight into 'the System' (all of them, from the police and care homes through to social workers and media), into life on the streets and the origins of how a person loses themselves. It offers no easy answers, but definitely raises a lot of questions - and a little more compassion.
at 12:37