Before We Visit The Goddess 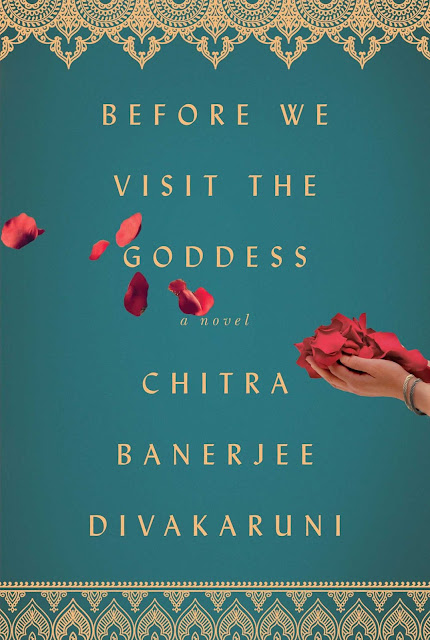 Just finished Before We Visit The Goddess by one of my all-time favourite authors, Chitra Banerjee Divakaruni. I first discovered Divakaruni around 2007. I'd seen The Mistress of Spices movie. The old VSO resource room in Kigali used to have a whole wall of abandoned books, and Mistress of Spices was among them. Picked up in an airport somewhere in the world and delivered to central Africa. I read a lot of books from that shelf, all those evenings without a television or radio.

Divakaruni is one of those rare writers who manages to turn prose into poetry at ever pen stroke. Sister of My Heart is high on my list of favourite books, but you can never be disappointed with anything she writes. There is a fluidity to her stories which pulls you under. Always a nice marriage between truth and daydream.

A beautiful, powerful new novel from the bestselling, award-winning author of Sister of My Heart and The Mistress of Spices about three generations of mothers and daughters who must discover their greatest source of strength in one another—a masterful, brilliant tale of a family both united and torn apart by ambition and love.

The daughter of a poor baker in rural Bengal, India, Sabitri yearns to get an education, but her family’s situation means college is an impossible dream. Then an influential woman from Kolkata takes Sabitri under her wing, but her generosity soon proves dangerous after the girl makes a single, unforgivable misstep. Years later, Sabitri’s own daughter, Bela, haunted by her mother’s choices, flees abroad with her political refugee lover—but the America she finds is vastly different from the country she’d imagined. As the marriage crumbles and Bela is forced to forge her own path, she unwittingly imprints her own child, Tara, with indelible lessons about freedom, heartbreak, and loyalty that will take a lifetime to unravel.

In her latest novel, Chitra Banerjee Divakaruni explores the complex relationships between mothers and daughters, and the different kinds of love that bind us across generations. Before We Visit the Goddess captures the gorgeous complexity of these multi-generational and transcontinental bonds, sweeping across the twentieth century from the countryside of Bengal, India, to the streets of Houston, Texas—an extraordinary journey told through a sparkling symphony of voices.

I've always enjoyed generational sagas. I'm a huge fan of The Seduction of Silence by Bem Le Hunte, and this reminded me a little of it, in as much as it follows families, and especially daughters, from India to the West, following their fates and fortunes. Slightly tricky mix of first and third person, which felt as though it needed a little concentration, but which also allowed you to think something about a character and have that thought dispelled in their own voice.

I also love books that teach me new words, and there were many gifts in this one: dhoti, panch phoron, tiffin carrier, kukri, invective, sententious, martinet, andiron and escritoire. As well as some imaginative lines:

Ebb and flow, ebb and flow, our lives. Is that why we're fascinated by the steadfastness of stars?

...Meena, her still, pale body on the hospital gurney, her long hair falling over its edge like sorrow.