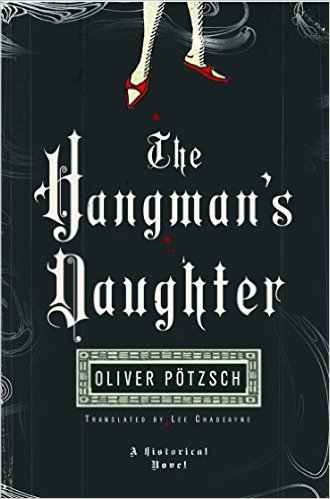 The cover caught my eye.

Germany, 1660: When a dying boy is pulled from the river with a mark crudely tattooed on his shoulder, hangman Jakob Kuisl is called upon to investigate whether witchcraft is at play. So begins The Hangman's Daughter - the chillingly detailed, fast-paced historical thriller from German television screenwriter, Oliver Pötzsch - a descendant of the Kuisls, a famous Bavarian executioner clan.

The author being a descendant of the main characters does add an interesting twist to the tale.

The Hangman's Daughter (original title in German: Die Henkerstochter) is a novel by Oliver Pötzsch. First published in Germany by Ullstein Verlag in 2008, it was translated into English and issued digitally under the AmazonCrossing imprint in 2010.[1] A paper edition was released in English by Houghton Mifflin Harcourt in 2010. - Wiki

I really did enjoy this, no doubt about that. However, there were a few rough edges, and I'm not sure whether that's Pötzsch's style or the translator, Lee Chadeayne. If it is Pötzsch, you rather suspect Chadeayne could have smoothed things over without compromising the integrity of the story. I know a translation should remain as faithful as possible, but at times repetition really became distracting:

"My father has always considered me to be a ne'er-do-well," said the young patrician, turning the poker round in the fire. His eyes looked almost dreamily into the fire.

There are a couple of instances where things are repeated three or four times in quick succession, which a strong editor could have ironed out to the advantage of the overall flow. It's a relatively minor issue though, and the characters are really strong: the big bear of an executioner, the vertically challenged doctor and the hangman's daughter who, thanks to the cover illustration, I mentally picture as either a Burton-esque corpse bride or not far off Lydia from Beetlejuice.

The villain of the piece has a suitably memorable disfigurement, and the political motivation for witchcraft trials is stomach twisting.

At times I felt the action scenes could have held more detail, and some of those details juggled continuity precariously, forcing the mind to insert things that weren't there before, but overall it's well paced and engaging. The set up for a macabre mystery series.


[UPDATE: Check out this fascinating article: 10 Executioners Who Met Their Own Dark Ends]