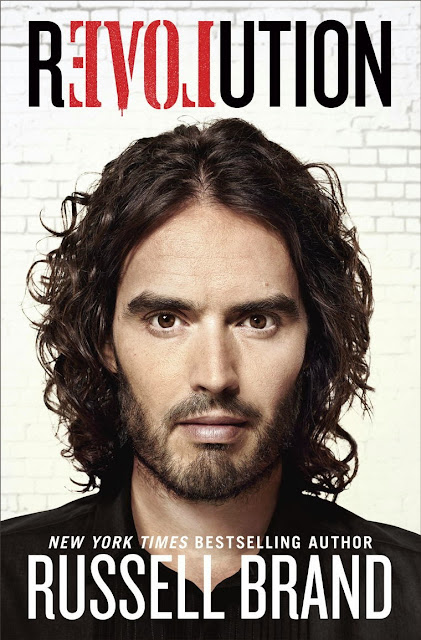 I finished reading this a couple of weeks back. Since then, he's been causing quite a stir with The Sun paper calling him a hypocrite (which is about the most hypocritical thing such a tabloid could come up with), and some bloke at RBS getting upset over his lunch getting cold.

Now, y'know me, I don't tend to bring politics onto this blog unless Scotland's running for independence. I'm not even sure why I picked this up. I've been feeling as though I should read more non-fiction and it was on the Amazon recommendations list. Plus, I do find Russell Brand an interesting character. He's like a living blog. He's been on telly for years now, and each of his books charts the next step in his life with an endearing amount of honesty and impressive vocabulary.

You might not agree with what he thinks, but at least he does think.

I found the book entertaining in parts, hard going in others. There was a lot of repetition. There are only so many times you can say 'the system is unfair' before you need to suggest solutions. Solutions were suggested, but it was more of a literary review of other people's solutions (so and so said this, go look them up...) rather than a revolutionary new route.

I don't think that's a bad thing. I think books like that are hugely important. Books that voice what many of us instinctually feel, putting into words the nagging sense that something isn't right, and then showing that there are alternatives. Many people don't have time to read political history or transpersonal psychology (he mentioned Terence McKenna, which instantly raised my estimations, but left out Grof) and it's nice to have someone explain the basic ideas in a language you understand, introducing you to other thinkers and writers who perhaps hit home.

A compendium of counter-culture.

I was always waiting for the action point, though. The practical bandwagon upon which I could jump to actualise my revolutionary bent.

A great hero of mine is comedian Mark Thomas. He used to have an incredible after-hours series on telly where he'd get right up the noses of the establishment, parading tanks in the Lord Mayor's Show, calling up gunrunners (my personal favourite) and whispering subversive words whilst flying a hot air balloon over Menwith Hill listening station - the man is a legend.

He came up with one of the best books of this nature: The People's Manifesto. Very small, very short, but absolutely wonderful. He went around the country asking people to suggest political policies they would vote for. 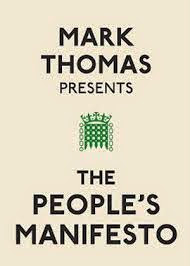 I think that's what was lacking here a little. Revolution was very good at pointing out why change is needed, I was left in no doubt of that, but it missed the opportunity to present follow-up ideas you could really get into.

I very rarely read the news from home anymore. I don't have a telly or a radio, and accessing news sites with my internet connection is time consuming, so mostly I just wait to hear word-of-mouth about the important stuff. It has to be fairly important for people to bother telling you.

However, I have kept half an eye on the unrest back home, especially the #CameronMustGo trend on Twitter, and the political memes that float past. For that reason, I do think this is an important book. It sows the seed of an idea which seems to be growing fast: inequality is outstripping conformity.

There is a schism that I struggle with regularly working in development. So often I hear that the world is getting worse, that people are suffering more than ever, and that it's all gone to pot.

I tend to counter with the international statistics that say, actually, the world is getting better, fast. As a woman, it's easy to watch Downton Abbey and say 'Thank Christ I don't live in those times.' I'm nobody's property, I can vote, wear trousers (something my mum wasn't even allowed to do when she started work), I'm mistress of my own (limited) finances. Having written Angorichina, about tuberculosis in the 1930s, I daily marvel at medical progress and the eradication of polio. I'm also a huge fan of the statistician Hans Rosling, who helps to explain that - thanks to family planning - the population growth is under control and all is becoming right with the world (both of those videos well worth a watch). Infant mortality is down, access to clean water and medical facilities are up, developing economic countries have access to internet, education, literacy and tax revenue which builds welfare states... there's a lot to be thankful for. Or, more accurately, proud of. This wasn't gifted, it was fought for and won.

However, the schism comes when you start to see it as illusionary. Keep people busy scrabbling for scraps and they won't notice the feast at the top of the table.

Last year at Cheltenham Literature Festival, I went to listen to a very interesting political debate titled: How can we create a fairer, more open society? Can government policies make a real difference, and if so, how?


This is where things start to grate. On the surface, so much has improved. But take a look at just how fast the increase between the economic haves and have nots continues to grow.

When you have something, you have something to lose, and welfare states provide that buffer zone between Victorian street urchin and modern-day underclass. Our current political system is eroding that buffer zone at an impressive rate of knots. The UK is seeing a huge rise in families resorting to food banks, an increase in homelessness and a shortfall in sheltered accommodation, services for the disabled and the old slashed, the NHS dismantled and a growing awareness (thanks to the likes of Max Keizer and, yes, even Russell Brand) that the economy, a once revered realm of high finance, incomprehensible to the common man, is in fact just an idea, and one which can be entirely re-thought.

As I said about Scottish independence: Nothing is more dangerous - or exciting - than an idea. But ideas take time to seed. Revolution provides nutrients for those looking to grow their ideas, and such nutrients is much needed.

I was having an interesting back-and-forth on Twitter via my development company a while back. Someone was saying how wonderful it is (after watching Hans Rosling's stats) that four billion people in developing countries can now afford to buy a motorcycle, giving them access to food, medicine and a better quality of life. My argument is that access to such basics as food and medicine, when there is more than enough to go round, shouldn't be reliant on whether or not you can afford to buy a motorcycle. Shouldn't that be a human given?

"Every generation has to fight the same battles for peace, justice and democracy, there is no final victory nor final defeat." - Tony Benn

Let's see how long before we start fighting.