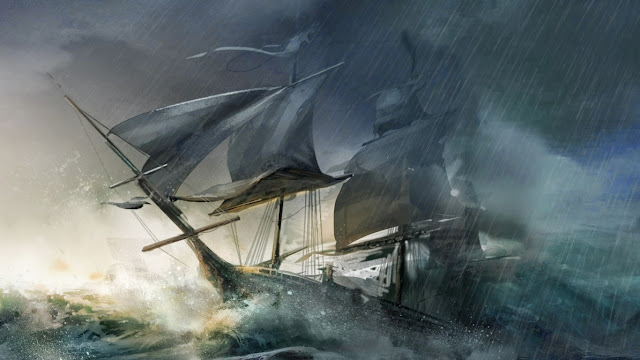 Just settling down to add a little more to my new manuscript. Still not sure about it, but the characters are slowly starting to take form and they are pulling me along. A couple of them I already feel as clearly as I did Georgie or Joe.

There's a level at which characters speak loudly enough in your mind that they're capable of writing themselves. Sometimes it happens from the off (Georgie), sometimes it takes a little while (Ollie). If it isn't there - for me - by 20k, it ain't comin'. The only way to know is to keep writing.

One of the characters that arrived on the page a little unexpectedly, and who I am strongly warming to, is a guy called Copper Jack. Here's his entrance a few days ago. Goes without saying it's rough and unedited inspiration.

He didn’t go immediately. It wasn’t that he didn’t feel her urgency, but he didn’t want to get on the wrong side of Thomazin. She was worth her weight in gold for the number of seafarers that washed up at his bar asking for a fondle. Added to that, the woman had a tongue as sharp as a razor. She could probably shut him down with gossip alone.

No, there were never any winners when it came to a quarrel with Her Majesty.

Still, he couldn’t very well ignore the look on Carrieoliner’s face. Not if he expected to sleep at night. There was something about that girl which was missing in Thomazin. Not beauty or bravado, maybe just heart. She had this way about her, like she had never really grown up. The way she looked at you sometimes, it was as though you could break her with one harsh word, or a single careless deed.

“Bring it back,” the Harbourmaster said from beneath the hood of his black woollen cloak.

“I’ll bring it back when I’m good and ready,” Jack growled. “This is your job anyway.”

Jack glared at him and stuffed the iron key deep into his pocket. The wind was already starting to make the palm trees sway, and the waves along the coast were smashing ever higher against the rocks. He’d have to hurry if he was going to make shelter in time.

The path up to Hookfish Point was treacherous at the best of times. Slippery mud and crumbling rock turned your feet against you. Every footfall was a throw of the dice. That’s why people rarely bothered to light the storm beacon. It was meant to warn ships that there was a storm coming, and guide those home who were lost. The Harbourmaster was supposed to attend to it as part of his duties, but old Jedediah could hardly climb a set of steps, yet alone the hill to Hookfish Point. Besides, privateers were a hardy bunch. They could usually smell a storm coming a month away, and most of them saw the beacon as a dangerous advertisement to undesirables, such as the English Navy.

He swore under his breath until a gust of wind took it away.

Pausing for a moment to collect himself, he glanced out to sea. The clouds were gathering fast. They had that tar-black look about them which told you it was more than just a passing shower. God help anyone who found himself stuck out in that weather.

Sheltering his lamp in the inside of his coat, Copper Jack continued to climb. His feet slipped beneath him, yet each time he hauled himself up and checked that the flame was still alight.

Just as the air began to moisten with the first rain, he reached Hookfish Point. It was the furthermost point of the bay: a towering rocky outcrop, grown more forlorn year after year as the headland eroded into the sea. There, at the very top, stood a crude brick structure that looked like a well reversed. Instead of sinking down into the earth, the cylindrical structure rose upwards, to about chest height. On top of that, a large glass jar sat protecting a wick as thick as a man’s wrist. The wick connected to a reservoir of lamp oil inside the structure, and narrow vents around the top of the bricks allowed air to circulate without the wind getting in to blow out the flame.

Removing the key from his pocket, jack undid the padlock that chained the jar to the bricks. He lifted it carefully aside, then put his own lamp to the wick. Instantly, the oil caught fire. The heat of the blaze caused him to step back for a moment before lifting the jar back into place.

He chained it down and clicked the lock.

There, Carrieoliner. That was all he could do.

He touched his forehead by way of doffing an imaginary cap in the direction of the open ocean.

It's uncertain yet whether he will go on to play a part in a swashbuckling epic adventure, or whether he, and the rest of them, will sink down to the Davy Jones' Locker of my mind.

Either way, I can now name all of the masts and sails on a fully rigged ship.
at 21:03