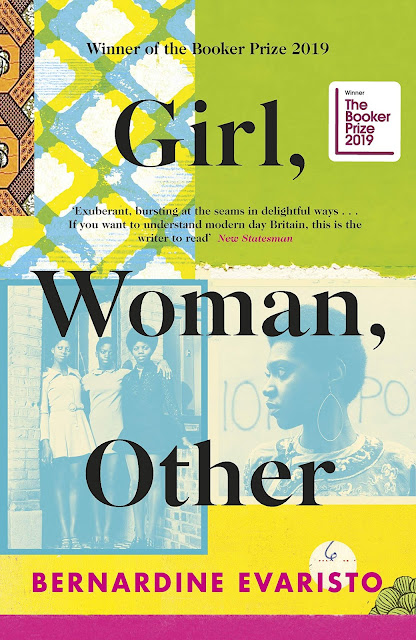 I recently read Girl, Woman Other, the Booker Prize winner by Bernardine Evaristo. She is the first black woman to win the prize, which is why I picked it up. A historic piece of literature.

Teeming with life and crackling with energy - a love song to modern Britain, to black womanhood, to the ever-changing heart of London

Girl, Woman, Other follows the lives and struggles of twelve very different characters. Mostly women, black and British, they tell the stories of their families, friends and lovers, across the country and through the years.

Joyfully polyphonic and vibrantly contemporary, this is a gloriously new kind of history, a novel of our times: celebratory, ever-dynamic and utterly irresistible.

It did take me a while to get into it, just because it's heavily UK-centric and I have a bit of an ambivalent attitude towards my birth country nowadays. I rarely read much that touches on contemporary Britain, whereas Rivers of London, The Watchmaker of Filigree Street and other fantasy titles that pull me away from politics and the true day-to-day of people are more appealing. I think I would have fallen into it quicker when I was younger. I was a drama school luvvie and the book opens amidst the rich art culture of London, whereas I now live in a country that doesn't have a theatre, so it's harder to remember what that was like.

It drew me in, though. Reminded me of one of my favourite films Crash (2004), which was all about a set of individual characters and how their lives intertwined and, quite literally in some cases, crashed into one another. It wasn't always immediately obvious how they were connected, but became so as the film went on.

This is similar, in that it bounces between countries, people and histories, showing how previous decisions affect characters futures and how private thoughts affect their public actions. Some parts were extremely touching. I especially liked Shirley, who starts out as an optimistic young teacher, and the way her job and the pupils she encounters slowly twists her into something else. Made me think about some of my old teachers with more empathy.

It also drew me in with the breadth of sexuality explored. From closet homophobes to the trans community, lesbian encounters to a wonderful generational moment where one girl is trying to come out to her grandmother - such a big thing for the girl, such a private, what-difference-does-it-make, she-is-who-she-is, why-shout-about-it moment for the grandmother.

Dominique guessed her own sexual preferences from puberty, wisely kept them to herself, unsure how her friends or family would react, not wanting to be a social outcast

she tried boys a couple of times

I did struggle a little with the narration as it was an audiobook. It was very good, but the narrator had a certain cadence which left every sentence dripping with sarcasm. There were twelve characters and after a while they blended into one another if you weren't paying attention. It might have been nice to throw a few other voices in there along the way just to help the listener keep pace.

Another thing I only noticed when I was looking for the quotes for this review, is that it seems the book is written in freestyle, so without orthodox grammar and punctuation. For that reason, I think it's a book better read than listened to - like David Mitchell's Cloud Atlas, which plays as much with written language as with characters. It reminded me of a poem by Benjamine Zephania called According to my Mood, which plays with text formation.

the Marxists demanded they set up a Central Committee of the Workers’ Republic of Freedomia, which was a bit rich, Amma thought, seeing as most of them had taken ‘a principled stand against the running dogs of capitalism’ as an excuse to not work
the hippies suggested they form a commune and share everything, but they were so chilled and laid back, everybody talked over them
the environmentalists wanted to ban aerosols, plastic bags and deodorant, which turned everyone against them, even the punks who weren’t exactly known for smelling minty
the vegetarians demanded a non-meat policy, the vegans wanted it extended to non-dairy, the macrobiotics suggested everyone eat steamed white cabbage for breakfast
the Rastas wanted cannabis legalized, and a reserved plot on the land out back for their Nyabinghi gatherings
the Hari Krishnas wanted everyone to join them that very afternoon banging drums down Oxford Street
the punks wanted permission to play shouty music and were duly shouted down
the gay guys wanted anti-homophobic legislation enshrined into the building’s constitution, to which everyone replied, what constitution?
the radical feminists wanted women-only quarters, self-governed by a co-op
the lesbian radical feminists wanted their own quarters away from the non-lesbian radical feminists, also self-governed by a co-op
the black radical lesbian feminists wanted the same except with the condition that no whiteys of any gender were allowed inside
the anarchists walked out because any form of governance was a betrayal of everything they believed in

I learned some interesting things, such as there having been a bookshop in London between 1978-1993 called Sister Write which only sold books by female authors, that apparently, according to studies, older men go for younger women but both younger and older women go for middle-aged women, and I loved the idea that a non sequitur 'only means that a conversation is free-flowing and intuitive as opposed to following a predictable trajectory.'

And, despite my grudging relationship with Merry Old England, there were a few things I related to strongly. This passage made me think of a friend who went to the UK as a qualified blood technician. He had a very good job working for the biomedical centre in Rwanda, but married a Brit and, on arrival, discovered his degree wasn't recognised and couldn't even get volunteer work.

just as she did not know that when she strode on to the graduation podium in front of hundreds of people to receive her ribboned scroll, and shake hands with the Chancellor of the University, that her first class degree from a Third World country would mean nothing in her new country

I also had a smile on my face as the author dived into a very accurate description of Hebden Bridge in Yorkshire, a place where I spent some of my formative years. Forgive the reproduction, I transcribed and wasn't sure whether to punctuate or not.

Hebden Bridge was a small haven of organic-friendly environmentalist residents and shops of tie chi pilates meditation yoga and holistic healing classes of writers theatre makers film makers casual artists dancers and activists of old fashioned hippies new fashioned non conformists as well as people whose families had lived there for generations and were used to the bohemians who had started arriving in the sixties.

It was also full of useful one-liners for life:

Marrying someone when you're in love with them isn't such a good idea, 'better to wait a few years, ten, twenty, thirty - never, to see whether you're still compatible after the passion has subsided.

And some lovely descriptive, such as a person who had 'a mouth that holds all her misery like a drawstring tightened around a pouch,' and the hello-goodbye sandwich, reserved for people you really don't want to talk to but can't afford to offend. Greet them effusively, depart effusively - not much in between.

It was a good story. As mentioned above, I'd probably suggest going for the tree version over the audio one. Worth a read.
at 19:13