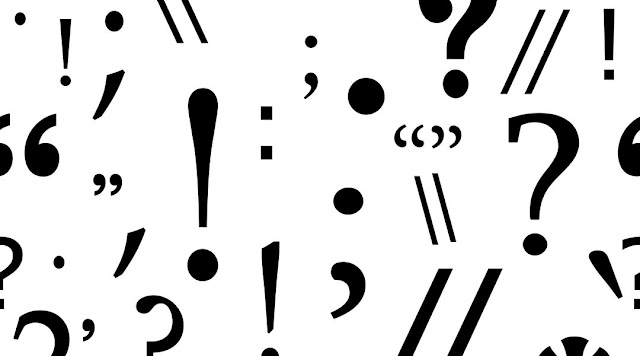 As part of my Writing 101 section, I sometimes give out tips and tricks on writing which I've picked up myself over the years, and which I teach in my fiction course in Kigali.

A topic which comes up regularly is punctuation for dramatic effect.

I believe this is one of the major factors which separates professional writers from those who are still developing their style. What I mean by this, is that if you pick up a published work of literature from a bookshop, you won't see these mistakes:

In short, there are some punctuation marks which are safe. You can use as many of these as you like, but only one at a time. These are:

Then there's the difficult punctuation. The stuff that, if over used, can really drag down your manuscript. That's not to say you can never use these punctuation marks. Of course you can, every punctuation mark has its purpose, but use them extremely sparingly, and only when you're absolutely convinced nothing else can do the job with more subtlety. Once or twice in a book is fine. Once or twice every page is not.

The reasons for this:

Punctuation is the unsung hero of literature. Its purpose is to make writing flow effortlessly, so that the meaning is clear without detracting from the story.

Semi-colon (;): 90% of the time, a full stop or a comma work better and detract less. A semi-colon does one specific job. It partitions two separate sentences that are so closely related, they could be the same sentence. Meaning that the sentences sound disjointed with a full stop, and can't be separated by a comma because they aren't joined by something like and or then or which - the second sentence really is a complete sentence in itself. The instances of this occurring in a novel are pretty slim, and the likelihood of it being the only way of saying what you want to say without tweaking it to a full stop or a comma, even less so. If you see yourself using a semi-colon more than a couple of times in a chapter, you probably want to rethink how you phrase things.

Exclamations (!): An exclamation is the highest point of extreme excitement or surprise you can get. If you see it used lots! Like, more than once or twice in a chapter! Then your reader will be in a constant state of surprise! It's really irritating! Also, it's often used when it's surplus to requirement!

The shouting and the exclamation denote the same thing. It isn't wrong, but it's just as right, and perhaps more succinct, to choose one - the punctuation mark or the descriptive:

Use exclamations extremely sparingly throughout your manuscript, and only when you're writing on the edge of your seat.

Also, only in dialogue, not in the body of the prose.

The point of writing is to describe situations and emotions. If you do that well enough, your reader will be on the same page as you anyway, without needing sledge hammer punctuation to illustrate a subtle point.

Ellipsis (...): This is sometimes used to build... suspense, but most often used to end a sentence when the character is trailing off...

It's the opposite of an exclamation. An exclamation is really immediate! It denotes urgency! Everything needs to be read quickly!

Again, it's something you use in dialogue, not prose. It has its purpose, but like a semi-colon, there's usually a better way to do it. Use your words:

"I don't know. I feel like," James paused, trying to find the right words. "I feel like I should have used a comma instead of an ellipsis."
Ange wholeheartedly agreed.

Sometimes an ellipsis is used to show characters interrupting one another. I'd suggest an em dash works better:

“Just listen, I’m trying to—”
"Trying to what, Marion? Teach me grammar?"

An em dash is a long hyphen. You get it in Word by typing two hyphens together and hitting enter (--). I think you can also achieve it with ctrl+alt+minus (not hyphen).

Those are my top tips on punctuating a solid manuscript. Like I say, it's not that you never use the difficult punctuation marks, it's just that they speak very loudly and can detract from the flow of your story. Choose your moments, and grow to rely on the safe ones. Never forget that it's your words, your descriptive, that guides the reader through the story, and the character's emotions, above the use of punctuation.