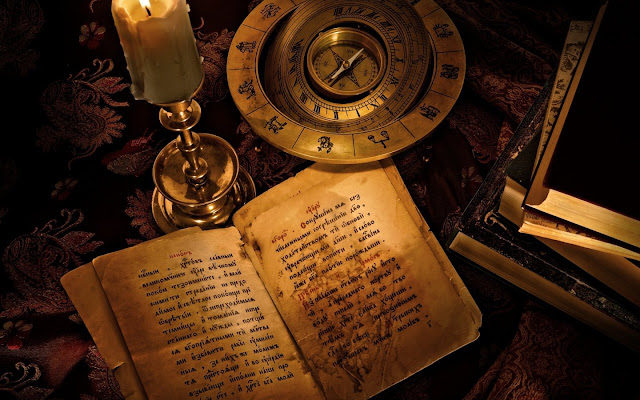 Thought I'd share some very short, rough snippets. The first is from Secret Order:

Once her hands were untied, Suzan began rubbing her wrists to restore circulation. The girl didn’t untie her feet, though.

“What is this place?” she asked, her eyes now adjusted. “Some sort of library?”

It was a relatively small room, but made all the smaller by towering bookshelves against each wall. Hundreds of thousands of books. Mighty tomes and slim paperbacks, not a gap between them. Even the ceiling was decorated with book spines, old leather with faded gold and silver onlays.

“The world is a library,” the man said. “This is but one small corner of it.”

Suzan nodded as she continued to cast her eyes across the myriad covers.

The tall man reappeared carrying a dainty china cup on a saucer of white and blue.

“How rude of us,” the girl said, collecting the cup and bringing it to Suzan. “We haven’t introduced ourselves. This is Aesop,” she said, indicating the dark sprite in the corner. “Grimm,” the tall, bald man. “And I am Evangeline.”

“Are those your real names?”

“Perhaps not as real as yours, but they are the only names we have.”

“Well, it has been an absolute pleasure to meet you,” Suzan said, sounding far calmer than she felt. “But, really, I must be getting home now.”

“I’m afraid that won’t be possible,” said Aesop. He came to crouch before her, staring up from her lap where the teacup trembled against its saucer. “You see, Suzan, you are a very special person. Our very special guest.”

“And I appreciate your hospitality, but—”

This bit's from my novella, with the working title The Wolf in the Woods:

Sometimes, whilst we worked, Grandma would tell stories.

She talked of the Ondines who lived in the river, their silver hair causing light to dance between the waves, and of Sylphs who floated on the summer breeze, carrying bees and butterflies between the flowers to collect pollen. She told me stories of the clouds, and the adventures they had seen beyond the purple mountains, and spoke of the Gnomes who lived beneath the earth and pushed up daffodils in spring.

Every now and then, once a moon or so, Grandma’s brow would furrow and her tales turn darker.

When this happened, she would gaze into the hearth, flames flickering in her ancient eyes. Her lips would tighten and she’d speak of things I did not understand.

“But Grandma,” I would say, calling her back. “Tell me again of the Healing Tree and the Upstanding Oak. Tell me of snowdrops and marigolds, and how you collect the lucky heather.”

She would look at me for a moment, then nod. Reaching for the silver bowl beside the fire, we would pop lemon drops and peppermints into our mouths and suck.

And finally, my mystery in progress, Creeper's Cottage:

Adam turned to flick her the bird, but the fog was so thick she’d already been swallowed. He continued down his lane. At the bottom you could usually see Capstone Reservoir, but he practically had to run his hand along the buildings to count the houses. He couldn’t remember a time when the clouds had ever been this heavy. They’d had a few pea-soupers when he was a kid. He remembered his mum driving like a granny one evening, bringing him back from a guitar lesson in Halterton, but this was something else entirely.

Part way down, the buildings ended and he stepped off the curb onto the road. Pausing to listen, he couldn’t hear anything coming, so started to cross.

He kept crossing, one foot in front of the other, but no curb came into sight.

For a moment, Adam wondered if, instead of crossing the side road, he’d accidentally wandered out into the middle of the main road. He panicked, stepping sideways and back, trying to locate the white line, but it wasn’t there.

“Shit,” he said to himself.

He took a few more paces forward, but still couldn’t find the curb.

A sound caught his attention. Something was coming.

There was something odd about the sound. He’d been expecting an engine. A slow-moving car; hopefully so slow-moving that if it hit him, he’d just bump the bonnet. Though the more he listened, the less like a car it sounded. In fact, if he had to place a bet, he’d say it was a horse approaching.

Everything went quiet for a moment. He took a step in the direction he thought he’d heard the sound.

A large black shadow rumbled past, causing him to leap back. It was a few feet out of view, cloaked in cloud, but he swore it was the shape of a carriage.

He stood perfectly still until the sound faded away.

Shaking, he looked at his shoes. They were caked in mud, but they were angled down, following the slope of the road.

The carriage hadn’t moved down. It had moved straight ahead.

So, that's what I've been working on. Likely have to take a break for a few days as I'm headed up to Scotland, but pleased with my progress.
at 16:12