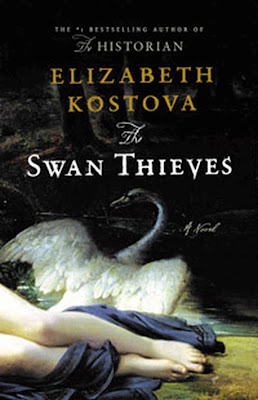 Last night, on the recommendation of my publisher, I finished reading The Swan Thieves by Elizabeth Kostova.

A little like Equal of the Sun, it was a slow burner, but it carried a similar quality. Both are works of impressive literary fiction.

Psychiatrist Andrew Marlowe has a perfectly ordered life - solitary, perhaps, but full of devotion to his profession and the painting hobby he loves. This order is destroyed when renowned painter Robert Oliver attacks a canvas in the National Gallery of Art and becomes his patient.

Desperate to understand the secret that torments this genius, Marlowe embarks on a journey that leads him into the lives of the women closest to Oliver and a tragedy at the heart of French Impressionism.

Kostova’s masterful new novel travels from American cities to the coast of Normandy; from the late nineteenth century to the late twentieth, from young love to last love. The Swan Thieves is a story of obsession, history’s losses, and the power of art to preserve hope.

It is steeped in artistry, you can smell the oil paint between the pages.

From a technical perspective, I liked the fact the chapters were short, but that Kostova stuck with whichever character still had something to say, resulting in some consecutive chapters by the same character. I suffer a little OCD on that point. When I was writing Angorichina there came a point where I wanted to do a continuation chapter on the same character. It felt too awkward. I had to insert another character for symmetry. With The Swan Thieves, it wasn't just consecutive character sections, but the mixture of mediums employed, including letters from the past interrupting contemporary prose. I wonder whether it counts as impressionist writing?

I have never been an artist, I struggle to draw stick figures, but in her portrait of a tortured painter, Kostova did make me think that perhaps the world of authors and artists isn't so different after all. We're all trying to capture images of the world around us, or the worlds of our imagining. Painters with brushes and canvas, writers with ink and parchment. Or, nowadays, MS Word.

The part that bothered me more was the theme of obsession. The book focuses very much on artists and their obsessions - their muses.

It's a realm that poets are most associated with, but I can attest to the fact that it strikes novelists too. A good novel is usually born of obsession, or at least a strongly persistent idea. I've mentioned before that you have to be fairly obsessed with a theme to write 100,000 words on it.

More than that, though, many writers, just like many artists, tend to have a certain quirk in their sanity that leads them to fixate on things, often feeding off that fixation to create their art. Whether the object of their fixation is aware of it or not. There is an overwhelming amount of research suggesting strong links between creativity and depression, or outright mental illness, and the number of incredible writers who turned to drink, drugs and sex either as part of their personality or through an attempt to escape their personality, is impressive. More often than not it seems the greatest creations are born in the midst of self-destruction.

About four years ago, I did a Robert Oliver. Looked up from what I was doing one day, and couldn't look away. It's a hideous experience at first, because you feel as though all of your words have left you. How can you be a writer and not have the language to describe something like that? A writer who can't write is - nothing? Those who have read Splintered Door might have noticed the acknowledgement. Lost Heart, was an expression of the worst of it.

After that, you sort of enjoy yourself. Providing you embrace your discomfort, you can write more productively than you ever did before. Or, in Oliver's case, paint - the same thing, over and over. Exploring the same object from every angle.

No muse is a reality. Which is why they appear to artists, who refuse to live in reality, as illustrated by their enthusiasm for re-designing it. Just when you think you've unleashed your creativity, you realise it's trapped inside a box. People like us, we're dreamers, drunks, and vagabonds. To want one thing so very much, is to be owned my an impossible idea. A fairytale. Something that cannot be written any other way.

“You must stay drunk on writing so reality cannot destroy you.”


― Ray Bradbury, Zen in the Art of Writing

I travelled halfway round the world (further than France, Mr. Oliver) to prove to myself that reality is, indeed, distasteful. The writer in me wrote the script but left the idiot in me to recite the lines. Still, the end of one story is always the beginning of another.

Like The Swan Thieves, once the spell is broken and you've had your 'no power over me' moment, you're free to get on with your life. Fresh air replaces the stale sweat of preoccupation.

I know some people yearn for a muse. I never did, though I can't say I wish I hadn't had one, because if I hadn't gone giddy, I wouldn't have written some of the stuff I'm most extremely pleased with. I also wouldn't have cried in doorways or bored half my friends rigid (seriously - one almost drowned in her soup).

All the same, Rosy Hours, or the parts that make it good - the poetry in it - would never have happened. That's worth a little humiliation and a few sleepless nights, isn't it?

So, yes. A lengthy ramble. But I did find myself closing The Swan Thieves with no small amount of unease, and rather a lot of heartfelt sympathy for Robert Oliver. Artists (writers included) and our mad captivations.

Is it strange that sometimes, when I'm writing, I visit the book's website just to listen to the music? I find it enchanting, yet, when I leave the page, I can never remember the tune.

Unrequited love is a ridiculous state, and it makes those in it behave ridiculously. ~ Cassandra Clare

To burn with desire and keep quiet about it is the greatest punishment we can bring on ourselves. ~ Federico García Lorca, Blood Wedding