I don't usually haul politics onto this blog, but it's such an historic occasion I feel like saying something. Although, after the abuse hurled at Andy Murray, I'm glad I've waited until after the vote.

Last night I went to bed not knowing whether I would wake to a United Kingdom or an independent Scotland.

It's polarised a nation in a way that I never thought I would see in my lifetime. As every generation, I'm sure, has lived to see something they felt they would never live to see.

Still, it's a significant occasion. According to the headlines it makes Scotland the first country in history to say 'no' to independence.

I went out with some friends last night for banana beer in Kigali, and we raised a toast to 'the former UK.' The levels of division that simply asking the question of independence has incited suggests that there is no such thing as a unified nation in the first place.

Banal nationalism refers to the everyday representations of the nation which build an imagined sense of national solidarity and belonging amongst humans...

This idea that nations are defined by a shared assumption that we are all of one mind, one history, one future.

Clearly, by the results of the referendum, no nation ever was.

As a writer, I'm extremely philosophical on this point. After all, the beginning of every great story begins: what if....


What if Scotland gained independence? Which currency would they use? Would they re-apply to join the European Union? What would the reaction of the British government be?

It's just in my character to want to ask and explore those questions, rather than re-read a book I've already read. One thing you know about stories is that they never end. One chapter leads to the next, one book to another. A 'yes' vote wouldn't have meant the end of anything, just the beginning of something new. Nations and empires come and go, but people are resilient and resourceful and it would have been extremely interesting to see what happened next.

As it is, I always remember an arrogant minister back when the referendum was fist mooted, who said that Scotland would vote no and that a referendum would put an end to it - independence would not be discussed again for a generation.

Looking at the figures: 45% Yes, 55% No, 84.5% turnout, with one constituency reporting 100% turnout - when the last general election mustered a UK average of 65% - rather suggests it's a hot political topic capable of mobilising the greater majority of a nation.

Nothing is more dangerous - or exciting - than an idea. And an idea is tenacious. I would not be surprised if this were the beginning of the conversation rather than the last word.

Either way, the gloating displayed by politicians and the public over who has won and who has lots, the physical assaults and ugly words hurled, has shown that there is very little united about a misnomered Kingdom.

It was certainly interesting to observe from Africa. As one meme read, of all the countries that have gained independence from the UK throughout history, not one has ever chosen to give it back.

My African friends were surprisingly in the 'no' camp, not seeming to equate the independence of their own countries as being on a par with Scotland's bid for freedom. The UK seems a sacrosanct emblem of power and unity, and, besides, they're all the same nation really, right? If Uganda can remain a nation with 56 tribes, surely the chieftains of the UK can cope with four (five if you count the Manx). Whereas most of the ex-pats I've talked to were in the 'yes' camp for the same reason as me - pure curiosity.

Don't underestimate curiosity. It's the reason so many Brits are living thousands of miles from home in the first place. It's also, I suspect, one reason why the 'yes' vote grew so rapidly. When the idea was fist mentioned everybody laughed. Independence is, after all, something that happens 'over there' in those far off desert places that we once called an empire. It doesn't happen within the empire itself!

Yet once the thought had sunk in, and the idea grew from an improbability to a possibility, people - including many English like myself - shifted from debating whether it could happen to: 'if it does happen, how could we make it work?' Doodling economic plans on napkins and trade agreements on the back of receipts.

I must admit to feeling a little deflated, though not surprised, at the result. I predicted a 'no' vote by a short margin, but I would not have been at all unhappy to wake to a 'yes' vote. Although, at the back of my mind, I can see the silver lining. We English need the Scottish and the Northern Irish and the Welsh to diversify our political pool. Otherwise it's just us, left here alone with our parliament and its cronies. What would we do without the Celts baring their buttocks now and then and burning down the occasional holiday home? They save us from our own sense of self-importance. A sense of self-importance which is likely to prove insufferable in the coming weeks.

And whatever Alex Salmond must be feeling today, I would like to thank him. He posed the question, he offered an alternative to our long accepted reality, and he mobilised a nation into a debate of truly historic consequence. He suggested one heck of a what if? 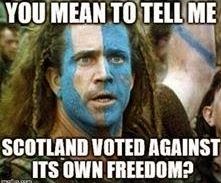