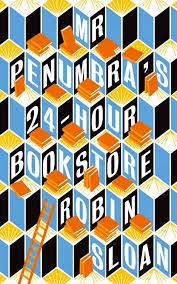 A friend introduced me to it whilst I was visiting Kenya. I haven't read a book that quickly in quite a while, it's extremely easy going and engaging - plus I like the trippy cover.

Recession has shuffled Clay Jannon out of his life as a Web-design drone and serendipity coupled with sheer curiosity has landed him a new job working the night shift at Mr. Penumbra's 24-Hour Bookstore. And it doesn't take long for Clay to realize that the quiet, dusty book emporium is even more curious than the name suggests.

There are only a few fanatically committed customers, but they never seem to actually buy anything, instead they simply borrow impossibly obscure volumes perched on dangerously high shelves, all according to some elaborate arrangement with the eccentric proprietor. The store must be a front for something larger, Clay concludes, and soon he has plugged in his laptop, roped in his friends (and a cute girl who works for Google) and embarked on a high-tech analysis of the customers' behaviour. What they discover is an ancient secret that can only be solved by modern means, and a global-conspiracy guarded by Mr. Penumbra himself... who has mysteriously disappeared.

It's a delightful mixture of modern age technology meets ancient secret society in order to crack a centuries-old conundrum. It rather makes you appreciate 'the Venice of our age.'

You also learn quite a bit about the inner workings of Google, which is fairly fascinating. I also had no idea about Mechanical Turk, which outsources data jobs to millions of - mostly Easter European - online workers. This might not sound enthralling, but in the context of the book, it really is quite impressive.

As they say: stuff that used to be hard just isn't hard anymore.

I strongly empathised with Kat, a wonderful character who epitomises the panic of mortality. Perfectly put, and poorly paraphrased: Every day there is something new to see, new discoveries to make, new things you learn - just think what could be achieved if you could preserve someone for a thousand years, how evolved they would become, what else they might be able to achieve and contribute to human progress.

She is desperately looking for immortality in a painfully recognisable way.

Lots of very interesting brain teasers, such as how far into the future can you imagine? So, you get to Star Trek in a couple of hundred years (or maybe sooner) - then what? The future will inevitably happen (bar mass unforeseen disaster), but there is a finite limit to what you can imagine in that future, based on what exists in your present and your history. It seems so obvious when you say it, but I'd never really noticed that before.

So, yes - I really enjoyed this book.

There are some great quotes on GoodReads and ShinyQuote.

There's also an e-mail at the back, which I'm going to contact.

The Order of the Unbroken Spine is looking for new members...