Sorry for the silence. It's been a fairly full-on few days.

The first of many, we hope. Thanks to the incredible efforts of Matt, Dan, Colin, Michelle, Ian, Morgen and many others. What they have achieved in such a short space of time, on such a tight budget, has been truly humbling.

Not just what they have created physically: booking the venues, accommodation, printing the fliers... but what they have achieved on other levels: the thoughts provoked and the friendships made. The following is a brief run-down of my weekend.

For me, it began on Friday night at the opening party. Jeremy Seabrook gave a poignant account of the Scene growing up in Northampton, and the lovely Will Davis (Twitter @WilDavis2012) read from his novel The Trapeze Artist, as well as his free online series: How Not to Survive.

He very kindly gave me a signed copy on swapsy, so hoping to bump into him when I pop down to London next month.

The Friday night after-party was extremely good fun. Thanks to Jane (and daughter Vienna), Morgen, Matt, Scott, Col, Ian (the 'alcoholic cupcake specialist'), Dan, Rob, Joe, Mark, Gary, Paul and Jeremy - and anyone else the sheer quantity of alcohol may have wiped from my brain... s'all a tad hazy...

Oh, and of course Paul and Jeremy's Panda.

I bunked in with Morgen for the night, over at Hotel Ibis. Got up silly early, rushed home, had shower, rushed back and started my day at the Durngate (where I did work experience aged 16) with a cup of strong coffee at Gary Russel & Joe Lidster's 'Meet the Author' chat. After which, I headed downstairs to listen to award winning Jane Lovering's reading. Great discussion about that kookie Vampire State of Mind.

This was followed by an incredible performance by the extraordinary Clare Summerskill, who delivered extracts from her book Gateway to Heaven, documenting the lives of lesbian and gay people and the fight for equality between 1940-90. She really was outstanding. Very privileged to have seen that.

I did a mad dash from there over to the library to catch the end of the sci-fi panel where Paul, Joe, Mark and Gary entertained a captivated audience with tales of writing for Doctor Who, Torchwood, and all the things I started to wish I had watched more of recently.

Felt rather bad ducking out after that, just as renowned poet Fay Roberts rocked up, but I needed to check into my next hotel and - more than air - I needed sleep.

After a shower, a nap and a nibble of complimentary chocolate cookies, I made my way back to the library and arrived just in time to assist Colin in welcoming the legendary Alan Moore. He's perhaps best known for writing V for Vendetta, League of Extraordinary Gentlemen and The Watchemen. He's also a Northampton native, and an avid gay rights activist, having founded AARGH! (Artists Against Rampant Government Homophobia) in reaction to Section 28.

As with Clare Summerskill and Jeremy Seabrook, I found myself blown away by his delivery. He read from The Mirror of Love - a poem documenting LGB history. Funny, brilliant, at times extremely sad.

I also learned quite a bit about Northampton that I didn't know - in that we're a county of outlaws. I rather like that, before then I just assumed we were a county of shoes. I think I like outlaws better. But then, even outlaws need shoes...

Talking of which, I rather liked his: shiny purple winklepickers.

Saturday night was a rather more reserved affair - we headed out for pizza, joined by performance poet Sophia Blackwell and some of the members of Northampton Gay Book Group, then back to the hotel for a few quiet, but entertaining, drinks. Panda was particularly on form.

Sunday was showtime. Poddled over to Waterstone's for an 11am signing.

You know that Black Books episode: 'Nobody wants to buy a book at this time in the morning'? - yeah. It's true. Most people were sleeping off the night before, authors included. And, no, Graham Linehan didn't walk through the door wearing an 'I Heart Books' T-shirt, more's the pity. But Emma, the manager, was absolutely lovely, and it was an incredible experience just being there - sitting at a table next to a bookcase filled with people I'd just been drinking with. Wall-to-wall Paul Magrs and Jane Lovering. Just a touch surreal.

After that I was up for a panel discussion at the library. Led by Morgen, it featured Sophia, V. G. Lee, Jane Reynolds and myself, chatting about L&B issues in literature. Really good fun. As Val said, we could have gone on for at least another hour given the chance. It was lovely to learn more about them, and to discover so many shared experiences as writers regarding process, critics and dealing with rejection. It was also extremely touching to see Jeremy and Paul (and Panda?) in the audience, supporting the girls.

After that, I did another interview with Morgen and gave a reading from Georg[i]e. Was a day full of firsts and experiences.

To be honest, I was just blown away by the atmosphere, and by the quality of the speakers. I know I've already said it, but what these guys have managed to achieve has truly been incredible. And the sense of fun and friendship that's gone with that has been brilliant. As they said on the opening night - it's a festival for everyone.

For authors like me, just starting out, it's pretty tough getting your foot in the door. To be offered an opportunity not just to appear alongside such well established writers, but to do so in a safe environment where you feel both supported and encouraged, is truly a rare and career-enhancing experience.

I came home on Sunday night and found myself overwhelmed by tiredness and rather a sense of sadness. It was such good fun, I wanted it to carry on. Then I remembered that this is really just the start of something fantastic. I hope to be fully involved in finding the funds for next year, and in establishing this as an event of national (and perhaps one day, international) renown. 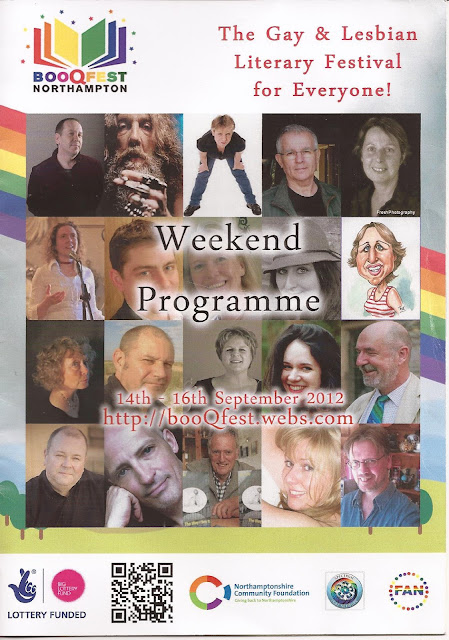 Email ThisBlogThis!Share to TwitterShare to FacebookShare to Pinterest
Labels: literature festivals, my work