Sum: Tales from the Afterlives 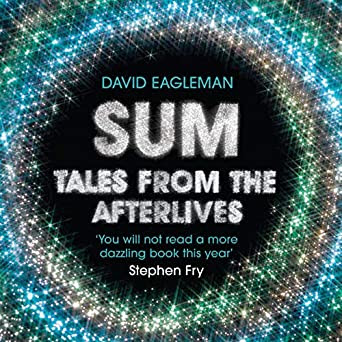 When I'm at a party and I'm not sure if I want to talk to somebody, I ask three questions. One of which being: What do you think happens after we die?
I've met some really interesting people through this. It's how I met one of my closest friends, who was of the opinion it's all a computer simulation. I recently sent him the above book because I knew he'd enjoy it. Most of our booze-addled conversations turn to the meaning of life and what happens after.

I discovered it because it was on sale and sounded interesting, with narrators from Stephen Fry and Gillian Anderson through to Jarvis Cocker and Noel Fielding. Which is adorable, coming from a guy who 'don't read too good.'

Yup, try getting that out of your head.

SUM shows us forty wonderfully imagined possibilities of life beyond death. In one afterlife you may find that God is the size of a microbe and is unaware of your existence. In another, your creators are a species of dim-witted creatures who built us to figure out what they could not. In a different version of the afterlife you work as a background character in other people’s dreams. Or you may find that the afterlife contains only people whom you remember, or that the hereafter includes the thousands of previous gods who no longer attract followers. In some afterlives you are split into your different ages; in some you are forced to live with annoying versions of yourself that represent what you could have been; in others you are re-created from your credit card records and Internet history. Many versions of our purpose here are proposed; we are mobile robots for cosmic mapmakers, we are reunions for a scattered confederacy of atoms, we are experimental subjects for gods trying to understand what makes couples stick together. These tales—at once witty, wistful and unsettling—are rooted in science and romance and awe at our mysterious existence while asking the key questions about death, hope, technology, immortality, love, biology and desire that expose radiant new facets of our humanity.

It's delightful in its scope and brevity. Each chapter is merely a few pages, or a few minutes, long. Yet, within that, is so much conjecture it leaves your head spinning in places.

Eagleman refers to himself as a possibilian and to Sum as a reflection of that position. According to his definition, possibilianism rejects both the idiosyncratic claims of traditional theism and the certainty of atheism in favor of a middle, exploratory ground. The possibilian perspective is distinguished from agnosticism in that it consists of an active exploration of novel possibilities and an emphasis on holding multiple hypotheses at once when no data is available to privilege one position over the others. Possibilianism is understood to be consonant with the "scientific temperament" of creativity and tolerance for multiple ideas when there is a lack of data. - Wiki

The opening lines are an absolute clincher:

In the afterlife you relive all your experiences, but this time with the events reshuffled into a new order: all the moments that share a quality are grouped together.

You spend two months driving the street in front of your house, seven months having sex. You sleep for thirty years without opening your eyes. For five months straight you flip through magazines while sitting on a toilet.

You take all your pain at once, all twenty-seven intense hours of it. Bones break, cars crash, skin is cut, babies are born. Once you make it through, it's agony-free for the rest of your afterlife.

But that doesn't mean it's always pleasant. You spend six days clipping your nails. Fifteen months looking for lost items. Eighteen months waiting in line. Two years of boredom: staring out a bus window, sitting in an airport terminal. One year reading books. Your eyes hurt, and you itch, because you can't take a shower until it's your time to take your marathon two-hundred-day shower. Two weeks wondering what happens when you die. One minute realizing your body is falling. Seventy-seven hours of confusion. One hour realizing you've forgotten someone's name. Three weeks realizing you are wrong. Two days lying. Six weeks waiting for a green light. Seven hours vomiting. Fourteen minutes experiencing pure joy. Three months doing laundry. Fifteen hours writing your signature. Two days tying shoelaces. Sixty-seven days of heartbreak. Five weeks driving lost. Three days calculating restaurant tips. Fifty-one days deciding what to wear. Nine days pretending you know what is being talked about. Two weeks counting money. Eighteen days staring into the refrigerator. Thirty-four days longing. Six months watching commercials. Four weeks sitting in thought, wondering if there is something better you could be doing with your time. Three years swallowing food. Five days working buttons and zippers. Four minutes wondering what your life would be like if you reshuffled the order of events. In this part of the afterlife, you imagine something analogous to your Earthly life, and the thought is blissful: a life where episodes are split into tiny swallowable pieces, where moments do not endure, where one experiences the joy of jumping from one event to the next like a child hopping from spot to spot on the burning sand.

Weirdly, I'm sure I'd heard that before but I'm not sure where or when. There was an odd sense of déjà vu with this book, even though I'm certain I've never read it in the past.

So many stories to choose from, but I think my favourites were reincarnating as a horse, living life backwards and the one where humanity dies off but we live on as scheduled e-mails or 'death switches'.

Definitely worth reading and weirdly suited for the bathroom as it's delivered in short, thought-provoking packages.
at 10:11