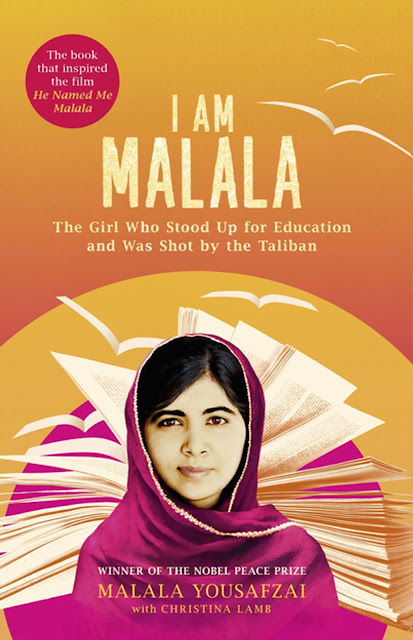 Next up on my lockdown reading list is I Am Malala.

I know, I'm very late to read this one. I remember my dad reading it when it first came out in 2013 and telling me how it surprised him that her home village sounded so beautiful and green.

Malala Yousafzai was shot in the head by a member of the Taliban on her way to school in 2012. She had always been an avid campaigner for women's education. Far from silencing her, this brought her campaign to global attention.

The biography is her story of growing up a Pashtun in the Swat Valley of Pakistan. It starts before the troubles, then takes you through 9/11 and the growth of extremism. It is also interesting to hear about American involvement from a local's point of view.

My father says that in our part of the world this idea of jihad was very much encouraged by the CIA. Children in the refugee camps were even given school textbooks produced by an American university which taught basic arithmetic through fighting. They had sums like: if out of ten Russian infidels, five are killed by one Muslim, five would be left. Or, fifteen bullets minus ten bullets equals five bullets.

There have been several historic stories of Peace Corps being used to keep tabs in the countries they work in, with volunteers being asked to spy. But being so blatant as to put that sort of stuff in a textbook for school is a move you would only conceive of in a pre-internet era. Someone would have Instagrammed a picture of that right away.

It was also interesting to hear about Pashtun culture. They rarely use the word 'thank you,' because they believe kindness can only be repaid with kindness, "it can't be repaid with expressions like 'thank you.'"

When she was recovering in England, the nurses thought she might like to watch Bend it Like Beckham, because it was about female empowerment, but she stopped watching when the girls were talking in their underwear, the immodest dress a bit of a shock having just come from a strictly Muslim country.

But there were other parts which were extremely relatable to, showing that the experience of being a child is quite universal in some ways. She loved a children's programme where the character had a magic pencil where the drawing came to life. You could draw anything and make it real. We had a similar programme in the UK called Polly Crayon, and the idea was as appealing to British kids as it was to Pashtun kids. She was also very honest about stealing as a kid, which is something I also did a couple of times, and I think my mum once told me she'd done (probably whilst telling me off about doing it myself). And how you learn about right and wrong by testing those boundaries. You know the theory, but it's only when you put it into practise that the penny finally drops and you realise why you shouldn't do certain things.

It was also nice to hear so much about her father's life and his campaign for women's education. Her parents both had a strong influence on her and it was absolutely heartbreaking when she was moved to the UK and they were left behind in Pakistan, seemingly because of a politician's lust for publicity delaying their visas. As she was recovering, the hospital had to turn away lots of visitors, both celebrities and politicians. Perhaps they just wanted to be there to offer support, but it didn't sound like they had thought much beyond their own thirst for a photograph. I imagine the last thing you really want after being shot in the head is a camera thrust in your face.

Anyway, an excellent read, and well done to Christina Lamb who helped bring Malala's story together and create such a readable, relatable and emotional ride.

You can donate to The Malala Fund to help sustain girls' education.
at 12:32