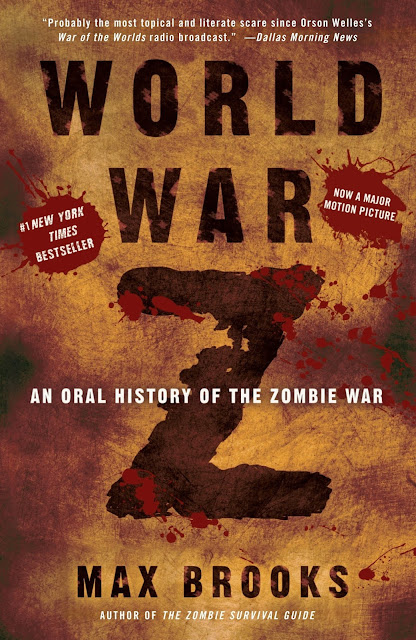 Continuing with my 'What I've Been Reading in Quarantine' list, here's World War Z by Max Brooks.

A few days before the total lockdown came into effect, my Peace Corps friend, Nick, was being evacuated. All of the Peace Corps volunteers were being flown out on a private flight that was doing a tour of Africa to pick up PCs from around the continent before heading back to the US. He was about six months from the end of his service, so it was a bit of a sudden separation, and I headed over to say goodbye.

Because we couldn't touch, we tried a couple of perspective shots. One of them worked. 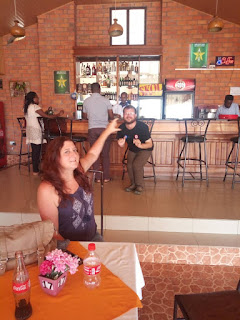 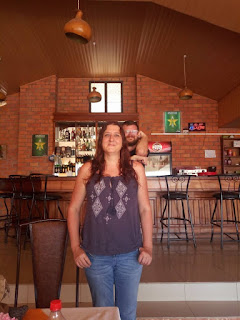 Whilst we were sitting there having a coffee, Nick's friend, Katie, suggested I should read World War Z. She said she didn't rate the movie, but the book was excellent, and had several striking commonalities with the current situation.

It sounded interesting, so I picked up a copy.

We survived the zombie apocalypse, but how many of us are still haunted by that terrible time? We have (temporarily?) defeated the living dead, but at what cost? Told in the haunting and riveting voices of the men and women who witnessed the horror firsthand, World War Z is the only record of the pandemic.

The Zombie War came unthinkably close to eradicating humanity. Max Brooks, driven by the urgency of preserving the acid-etched first-hand experiences of the survivors, traveled across the United States of America and throughout the world, from decimated cities that once teemed with upwards of thirty million souls to the most remote and inhospitable areas of the planet. He recorded the testimony of men, women, and sometimes children who came face-to-face with the living, or at least the undead, hell of that dreadful time. World War Z is the result. Never before have we had access to a document that so powerfully conveys the depth of fear and horror, and also the ineradicable spirit of resistance, that gripped human society through the plague years.

Although it's about a zombie apocalypse, the way the story unfolds, it could be most deadly pandemics... well, up until they rise from the dead and military weapons no longer have much effect.

But the creepy bits, and I see why she recommended this, were because the outbreak begins in China, there's an attempted cover up, the one who first discovers it gets arrested and silenced, public transport goes down, countries go into lockdown and the economy becomes meaningless. It was such an astute and forward-thinking analysis of what might happen should something - like a pandemic - disrupt established social and economic systems. Brilliantly told through the eyes of those who lived it.

It really did cover every angle, situation and most nationalities, from military, to parents, to those in wheelchairs, to nerdy computer geeks who hardly left their bedrooms. Most places you might think to run, from the Paris catacombs (I'm sorry, what's that Tyrion Lannister, you want to hide in a crypt?) to a submarine, were explored and found wanting. It just really got you thinking about how unprepared we are for a zombie uprising.

It also made me realise that most of what I know about surviving an apocalypse comes from The Walking Dead, which isn't that helpful at the moment, as I don't think I'm allowed to smash anyone in the face with a shovel if they're still breathing?

Anyway, it was brilliant. Great recommendation.
at 09:57