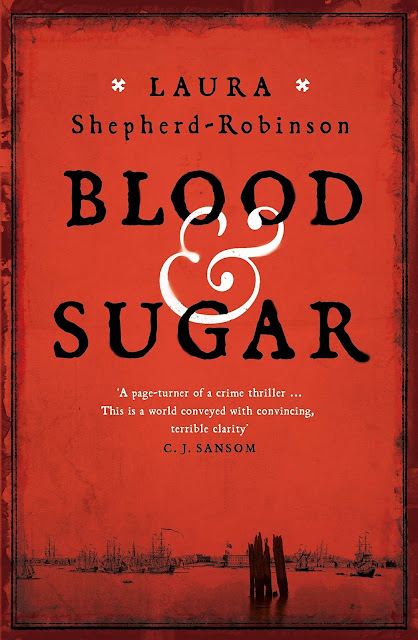 Another book review today, this one Blood & Sugar by Laura Shepherd-Robinson, audiobook narrated by Ben Onwukwe.

June, 1781. An unidentified body hangs upon a hook at Deptford Dock – horribly tortured and branded with a slaver’s mark. Some days later, Captain Harry Corsham – a war hero embarking upon a promising parliamentary career – is visited by the sister of an old friend. Her brother, passionate abolitionist Tad Archer, had been about to expose a secret that he believed could cause irreparable damage to the British slaving industry. He’d said people were trying to kill him, and now he is missing... To discover what happened to Tad, Harry is forced to pick up the threads of his friend’s investigation, delving into the heart of the conspiracy Tad had unearthed. His investigation will threaten his political prospects, his family’s happiness, and force a reckoning with his past, risking the revelation of secrets that have the power to destroy him. And that is only if he can survive the mortal dangers awaiting him in Deptford...

Interesting subject matter, inspired by the Zong Massacre of the same year. I remember studying slavery in secondary school in the UK, I assume it's still on the curriculum. We watched Roots and looked at a deck plan of a slave ship, showing how close the people were packed together. Then, flash forward to Rwanda a couple of years ago and my friend Henri releasing his book, My African Dream, explaining how he first came to learn about slavery and its aftermath when he moved to America to study. How he hadn't realised there was such a problem between blacks and whites in the West, until he lived in the shadow of Stone Mountain.

There are some nice lines in the book:


What a country, I thought. How we weave ourselves into knots, trying to convince ourselves we're not monsters, even as we grow fat upon the profits of our monstrosity.

If wishes were wine, I'd never be sober.

I couldn't help thinking it would have made an excellent computer game along the lines of Lamplight City. Trawling the back alleys of 18th century Deptford, asking questions in the opium dens and along the docks. It's got that sort of atmosphere about it. A mystery set beneath the eerie light of 'a tobacco sky'.

Thought it was a slight shame the historical note at the end wasn't read by the author. I understand keeping continuity, but I always think it's nice to hear about the research from the horse's mouth.

If you're interested in this area of history, The Book of Negroes by Lawrence Hill is also worth reading.
at 09:53