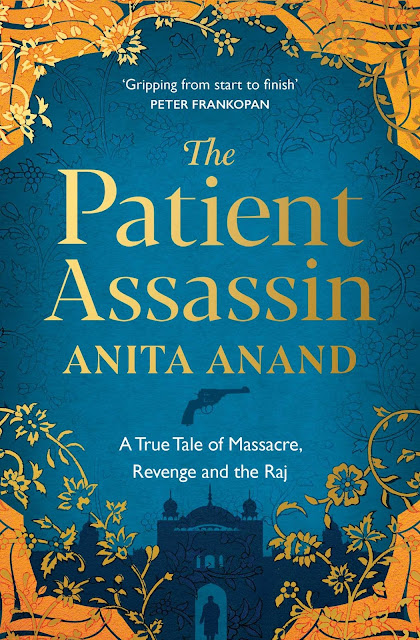 This book is brilliant!

I think it might have been recommended after I bought Shantaram, or perhaps the massacre was mentioned in there and I went looking for information. Anyway, this ended up on my TBR pile.

Anita Anand tells the remarkable story of one Indian's twenty-year quest for revenge, taking him around the world in search of those he held responsible for the Amritsar massacre of 1919, which cost the lives of hundreds.

When Sir Michael O'Dwyer, the Lieutenant Governor of Punjab, ordered Brigadier General Reginald Dyer to Amritsar, he wanted him to bring the troublesome city to heel. Sir Michael had become increasingly alarmed at the effect Gandhi was having on his province, as well as recent demonstrations, strikes and shows of Hindu-Muslim unity. All these things, in Sir Michael's mind at least, were a precursor to a second Indian Mutiny. What happened next shocked the world. An unauthorised political gathering in the Jallianwala Bagh in Amritsar in April 1919 became the focal point for Sir Michael's law enforcers. Dyer marched his soldiers into the walled garden, filled with thousands of unarmed men, women and children, blocking the only exit. Then, without issuing any order to disperse, he instructed his men to open fire, turning their guns on the thickest parts of the crowd. For ten minutes, they continued firing, stopping only when 1650 bullets had been fired. Not a single shot was fired in retaliation.

According to legend, a young, low-caste orphan, Udham Singh, was injured in the attack, and remained in the Bagh, surrounded by the dead and dying until he was able to move the next morning. Then, he supposedly picked up a handful of blood-soaked earth, smeared it across his forehead and vowed to kill the men responsible, no matter how long it took.

The truth, as the author has discovered, is more complex but no less dramatic. She traced Singh's journey through Africa, the United States and across Europe before, in March 1940, he finally arrived in front of O'Dwyer in a London hall ready to shoot him down. The Patient Assassin shines a devastating light on one of the Raj's most horrific events, but reads like a taut thriller, and reveals some astonishing new insights into what really happened.

I wasn't too sure what to expect when I started reading. Biographical non-fiction can be a bit dry sometimes, but Anand was just excellent in the way she told it. Really drew you in, and what a strange tale it was. You were left with more questions about Udham Singh and his clandestine lifestyle than could be answered in three or four volumes.

There's a good overview in The Guardian. There's also a scene from the film Gandhi which depicts the massacre. Though, from the book, it sounded more like it was just a place where people were hanging out and eating food, rather than a political protest at the time. Be warned, it's an upsetting clip.

The whole thing was just madness. The guy who led the shooting, in the hat in the video, was called General Dyer. Apparently, when he was a kid, he accidentally shot and wounded a monkey, and he cried for days over it. As the book asks - how does somebody like that end up leading a mass slaughter?

But, then, that's a question that's been contemplated a long time here in Rwanda, too. I think I previously mentioned Syndrome E, which is an empathy blocking brain response to extreme stress. Turns perfectly normal, empathetic individuals into complete lunatics.

That, or the boy who loved animals just grew up to be an imperialist twat who didn't mind killing people. I'm sure that can happen. Hitler was a vegetarian, and Richard Speck was known to show momentary kindness to animals.

Anyway, whatever his thought process, he opened fire on a lot of people that day, and Udham Singh, the patient assassin of the story, waited over twenty years to assassinate his superior, Sir Michael O'Dwyer, the Lieutenant Governor of Punjab. He would have tried to kill Dyer, but he'd already died.

It was a truly fascinating story, and what I really liked about Anand's telling was that she didn't simply present the characters as hero and villain. Although the Raj were undoubtedly villains, she also made them human, with families and interests outside of India. And Singh, far from being a saint, was into fast women and fast cars, and did a whole lot of shady business with Russia whilst waiting for the opportune moment.

It was just really, really interesting, as is the author, who is a British broadcaster and journalist whose family are Punjabi Sikhs.