The Life and Times of the Thunderbolt Kid 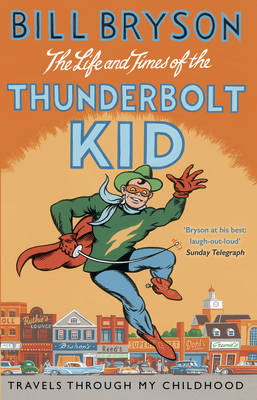 I really like Bill Bryson, he's one of the few authors I've read more than once and, alongside Terry Pratchett, one of even fewer I find laugh-out-loud funny.

This is an autobiographical look at his younger years:

Bill Bryson was born in the middle of the American century—1951—in the middle of the United States—Des Moines, Iowa—in the middle of the largest generation in American history—the baby boomers. As one of the best and funniest writers alive, he is perfectly positioned to mine his memories of a totally all-American childhood for 24-carat memoir gold. Like millions of his generational peers, Bill Bryson grew up with a rich fantasy life as a superhero. In his case, he ran around his house and neighborhood with an old football jersey with a thunderbolt on it and a towel about his neck that served as his cape, leaping tall buildings in a single bound and vanquishing awful evildoers (and morons)—in his head—as "The Thunderbolt Kid."

Using this persona as a springboard, Bill Bryson re-creates the life of his family and his native city in the 1950s in all its transcendent normality—a life at once completely familiar to us all and as far away and unreachable as another galaxy. It was, he reminds us, a happy time, when automobiles and televisions and appliances (not to mention nuclear weapons) grew larger and more numerous with each passing year, and DDT, cigarettes, and the fallout from atmospheric testing were considered harmless or even good for you. He brings us into the life of his loving but eccentric family, including affectionate portraits of his father, a gifted sportswriter for the local paper and dedicated practitioner of isometric exercises, and of his mother, whose job as the home furnishing editor for the same paper left her little time for practicing the domestic arts at home. The many readers of Bill Bryson’s earlier classic, A Walk in the Woods, will greet the reappearance in these pages of the immortal Stephen Katz, seen hijacking literally boxcar loads of beer. He is joined in the Bryson gallery of immortal characters by the demonically clever Willoughby brothers, who apply their scientific skills and can-do attitude to gleefully destructive ends.

Although it was funny, it was also a little sad, the way he recounted what life was like in the pre-internet, pre-mobile phone world of the 1950s. He talked about what it was like growing up in the baby boomer generation, where kids seemed to rule the world, and where technology's dark side hadn't yet been discovered. Where household appliances, moon landings and even the threat of nuclear annihilation took on a sort of cheerful tone. Technology could only improve the world in the days before CFCs, plastic waste and pollution were really understood.

David Attenborough touched on something similar in his recent A Life on Our Planet documentary. Looking at how quickly the world has changed in such a very small space of time, both in terms of technological progress but also what we have done to the environment. It was a bit depressing listening to the variety of new inventions and the uniqueness of each town that Bryson remembers from his youth, and knowing that almost every big city around the world now contains pretty much the same international brands, fast food take-outs and clothing labels.

It would be interesting to know what the world will look like after the impending population crash and whether we'll beat the clock and manage to ride the population peak through to the other side. Mass farming, multinational companies, advertising and even capitalism surely can't survive what's coming. It's just a matter of whether we give up those ideas earlier or later. The earlier we do it, the more chance we might survive.

My friend Jo said something interesting the other day, about how we were taught about CFCs and global warming in primary school, but we assumed that adults had it under control and were working on the solution. I felt exactly the same in school. I remember doing the art project on global warming and the hole in the ozone layer, and assuming it was under control. Now Jo's daughter is learning about it at primary school and it turns out nothing was under control.

Which is why it was rather wonderful to disappear into Bill Bryson's childhood, where there was a sort of innocence about all this. From childhood, I was taught about CFCs, lead in petrol and global warming. He wasn't. At that point, refrigerators, television and cars were all brand new and there to be enjoyed.

It would be nice if there was a bit more joy in our technological age. More inventions to awe us and take pleasure in, without those things then inviting a global apocalypse.

I feel like we could all benefit from a holiday to Iowa in the late 50s.

It's hard for people now to remember just how enormous the world was back then for everybody, and how far away even fairly nearby places were. When we called my grandparents long distance on the telephone in Winfield, something we hardly ever did, it sounded as if they were speaking to us from a distant star. We had to shout to be heard and plug a finger in an ear to catch their faint, tinny voices in return. They were only about a hundred miles away, but that was a pretty considerable distance even well into the 1950s. Anything farther - beyond Chicago or Kansas City, say - quickly became almost foreign. It wasn't just that Iowa was far from everywhere. Everywhere was far from everywhere.

I knew more things in the first ten years of my life than I believe I have known at any time since. I knew everything there was to know about our house for a start. I knew what was written on the undersides of tables and what the view was like from the tops of bookcases and wardrobes. I knew what was to be found at the back of every closet, which beds had the most dust balls beneath them, which ceilings the most interesting stains, where exactly the patterns in wallpaper repeated. I knew how to cross every room in the house without touching the floor, where my father kept his spare change and how much you could safely take without his noticing (one-seventh of the quarters, one-fifth of the nickels and dimes, as many of the pennies as you could carry). I knew how to relax in an armchair in more than one hundred positions and on the floor in approximately seventy- five more. I knew what the world looked like when viewed through a Jell-O lens. I knew how things tasted—damp washcloths, pencil ferrules, coins and buttons, almost anything made of plastic that was smaller than, say, a clock radio, mucus of every variety of course—in a way that I have more or less forgotten now. I knew and could take you at once to any illustration of naked women anywhere in our house, from a Rubens painting of fleshy chubbos in Masterpieces of World Painting to a cartoon by Peter Arno in the latest issue of The New Yorker to my father’s small private library of girlie magazines in a secret place known only to him, me, and 111 of my closest friends in his bedroom.

Soon millions of people were caught in a spiral in which they worked harder and harder to buy labour saving devices that they wouldn’t have needed if they hadn’t been working so hard in the first place.

Having watched The Social Dilemma recently, I do hope that we can turn it around. Technology could be capable of so many amazing things if it wasn't constrained by the greed of the mass market for jangly-key levels of distracting crap. Hopefully the fertility crash will remove that obstacle to some degree and return necessity as the mother of invention.