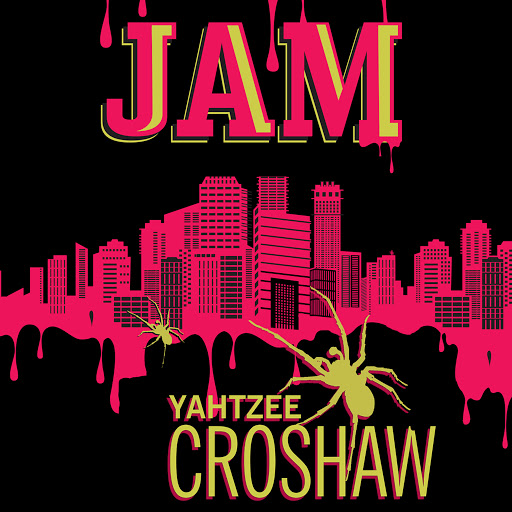 We were prepared for an earthquake. We had a flood plan in place. We could even have dealt with zombies. Probably. But no one expected the end to be quite so... sticky. Or strawberry scented.

Jam, a dark comedy about the one apocalypse no one predicted.

A group of friends wake up one morning to find the whole of Brisbane, Australia has been covered in a three-foot layer of carnivorous strawberry jam. One of the friends very quickly gets eaten by the jam, to illustrate just how deadly it is, but it's okay because they pick up a Goliath Bird Eating Tarantula (Mary) as a replacement cast member.

"...I was just thinking, this whole situation, it's like the one apocalypse no one called."

"...we all used to post on the same internet forum. We had this really long thread about what we were going to do when the apocalypse happened. We were all going to meet up here and live off the shops.  We kind of assumed it would be zombies, though."

"I think a lot of people did," I said, nodding.

There's a nice cross-over where one of the main characters is the head programmer from Mogworld and goes around wearing a Mogworld T-shirt. His name's Don and he's the epitome of what Peter Serafinowicz's character would have turned into in Shaun of the Dead if he'd lived a bit longer:

"Unlike you people, I have no illusion as to my usefulness in an actual apocalypse, and believe me, death holds no fear in a world without cappuccinos. No, the most I can hope for is to die in a pose that confuses future archaeologists."

The world has already split into tribes on day one. The characters move between a world of ironic plastic people, who always wear plastic bags because the jam only eats organic matter, and a group of coldly bloodthirsty - and topless - office administrators hiding out at Hibatsu.


Rumour had it that the Hibatsu Corporation had set up their head quarters in the centre of our central business district because this had been the nearest convenient country that didn't mandate product recalls until people other than the working class started dying. The law was changed after about three years of patient bureaucracy, but the Hibatsu building remained, the tallest building in the city, eighty stories of rented office space raising a permanent middle finger to socialism.

As with World War Z, there's a lot of attempting to figure out how to survive and gather the basics after such a disastrous event. Food and water being top priorities.

The river had contained 'impurities' in the same way that Jeffrey Dahmer had had a few minor personality quirks.

I enjoyed it. More my thing than his outer space work, but I still think my favourite is Differently Morphous.