The Labyrinth of the Spirits 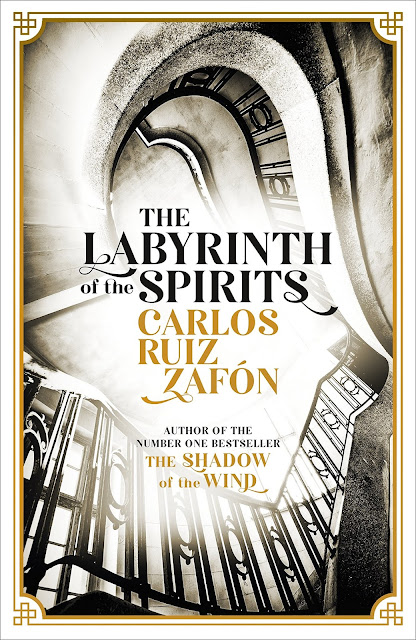 This was a wild ride. Many mixed impressions.

First of all, I picked it up in an Audible sale because I thought, Oh look, it must be a sequel to Shadow of the Wind.

Now, just as a little aside here. Good books are fairly hard to come by where I live. A couple of years ago, I asked my friend to build me a very small bookshelf. I didn't want a large one, because I knew I would never have very many physical books to put on it, and an empty bookshelf evokes sadness. However, there used to be a café called Acacia Book Cafe in Kigali. I'm not sure if it exists anymore. But one day, after a meeting, I went in to pay and they had a copy of The Shadow of the Wind on the counter. It was a café book, meaning it was there to be read by punters, but not for sale. The owner was sitting at a table nearby, and I eventually managed to persuade her to sell it to me.

It now resides on the top shelf of my bookshelf, where my favourite books live. Some are books I have read and loved in the past, and seem doubly special that I managed to find a copy in Kigali. For instance, there will always be a copy of Emergency Sex on any bookshelf I own. Others have been given to me by friends or sent to me by my Aunty Heron (Kate Tempest and Mary Beard). So I hoard them, like old friends, and I lend them out to people I know will return them. When my neighbour, Didier, discovered a love of fiction shortly before leaving to study in Canada, it was a great pleasure to be able to let him raid my small treasures, knowing that I had something worth offering.

So, it's fair to say I enjoyed The Shadow of the Wind, but it's been at least fifteen years since I read it.

As such, I almost gave up on this one several times. It took about two hours to really get into it, simply because my memory was so hazy. I had to pull up Wiki and a couple of YouTube reviews to remind myself who everyone was.

That done, I proceeded to disappear into the labyrinth and didn't resurface until the last page. It was phenomenal. And, hand on heart, I am hopelessly and devotedly in love with Alicia Gris. Christ, what a character. Just delightful. The imagery of the entire thing, but really, she made it. I haven't enjoyed a character that much in a long time. I'll never look at a fountain pen in the same way again.

There was, however, a slight Game of Thrones tendency for characters to appear for the sole purpose of being dispatched, usually within five minutes of explaining what they were about to do with their day. I forgive them all except You Know Who - and, if you've read it, you will know who. I fully accept that it was necessary for the story to go where it did, but I cannot forgive it. I enjoyed the back-and-forth far too much for it to end so suddenly.

Carlos Ruiz Zafón is just a world unto himself. There isn't another writer who can twist a writer's guts quite like he can.

Stories have no beginning and no end, only doors through which one may enter them. A story is an endless labyrinth of words, images, and spirits, conjured up to show us the invisible truth about ourselves. A story is, after all, a conversation between the narrator and the reader, and just as narrators can only relate as far as their ability will permit, so too readers can only read as far as what is already written in their souls.

Every book, every volume you see here, has a soul. The soul of the person who wrote it and of those who read it and lived and dreamed with it. Every time a book changes hands, every time someone runs his eyes down its pages, its spirit grows and strengthens.

Every day, I became more convinced that good literature has little or nothing to do with trivial fancies such as inspiration or having something to tell, and more with the engineering of language, with the architecture of narrative, with the painting of textures, with the timbres and colors of the staging, with the cinematography of words, and the music that can be produced by an orchestra of ideas.

He never tired of telling me that in literature there is only one real theme: not what is narrated, but how it is narrated. The rest, he said, was decoration. He also told me that writing was a profession one had to learn, but was impossible to teach...

Sometimes it's best to put your mind to work and exhaust it, rather than let it rest, in case it gets bored and starts eating you up alive.

It is Gothically dark and wonderfully literary.

Now, I just need to think on whether I can go back and read the other two, knowing how it all ends. I think for the sheer pleasure of his prose, I will have to add them to the list.

An outstanding author and a memorable tale.
at 08:56