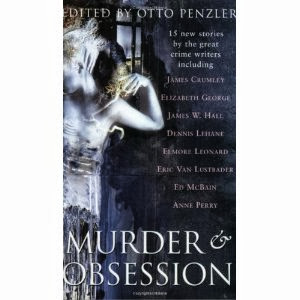 I mentioned a while back Anne Perry, a murder mystery writer who caught my attention.


When this story found its way to my desk, the author acknowledged that she thought it was the best short story she had ever written. She is right. This wonderfully evocative tale of the trenches in World War I and the terrible crime it reports will haunt your memory for a long time to come.

It doesn't seem, at first blush, to be a crime story at all, but as you continue along you will learn that it is.

This is a different era for Anne Perry, who has achieved great success with her Victorian era mystery novels, but it must have been important to her as she has produced such  a vivid account of the place and time.

Perhaps the reason for the power of this unusual tale is that it was inspired by a real-life person. The kindly but strong chaplain who understands the obsession of the officer who wants to be a hero was based very closely on the author's grandfather.

Heroes won the Edgar Allan Poe Award from the Mystery Writers of America as the best short story in 2000.

When I say short story, it is incredibly short and, for most of it, it doesn't feel like a crime but a descriptive of life in the trenches, sort of Birdsongesque.

I don't know if it's just how my mind works, constantly looking for a plot, or whether it's because Penzler throws in a spoiler during his introduction, but I knew who it was the moment the character was introduced. Though I didn't know how he'd done it until the trousers. I just assumed it was a long-standing squabble and he'd shot him.

I wonder whether that says something about our culture as a whole?

The plot hinges on someone being beyond reproach, or beyond suspicion, due to the desperate need to believe in a hero. In that respect, the trenches of the First World War make an ideal setting.

The story itself, in not reading like a murder mystery, relies on our desire to believe in heroes too. We should be as shocked as the chaplain to discover the truth.

In actuality, we're living in an age of Wikileaks and Homeland. Especially Homeland. We all know it's the squeaky clean one that's dirty. You can't put that cat back in the bag. We suspect everyone and everything simply for being in the story; a nation adept at guessing unguessable endings.

I always used to try and miss the first few minutes of Columbo as a kid. I never understood the point of a crime show that told you who it was from the very beginning. Perhaps the point is (and the reason people keep watching Homeland) not who dunnit, but how they dunnit, and why?

I know I harp on about it, but I still think McEwan's Butterflies is possibly the best short story ever in that respect - because you know who dunnit, but you refuse to believe it, even though he ain't no hero.

Anyway, an interesting literary sojourn. Reminded me of earlier days, post Point Horror, when I'd devour Sidney Sheldon  (because he wrote I Dream of Jeannie, and who doesn't think Larry Hagman looked cute in an officer's uniform?) and found myself Haunted. It would be a crime not to feel nostalgic.
at 12:34