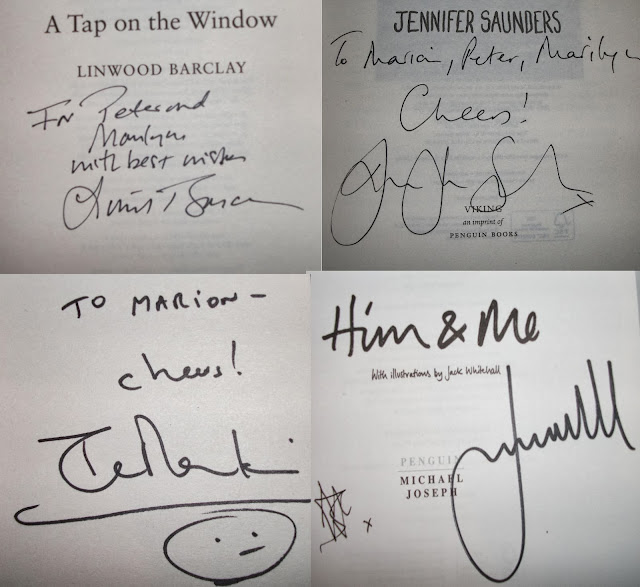 And so ends another year, with a few more signed copies to add to the bookshelf. Top left, clockwise: Linwood Barclay, Jennifer Saunders, Jack (right) and Michael (bottom left) Whitehall and Ian Rankin. Plus we also saw Sir Derek Jacobi speak, and attended a political debate on social mobility.

Another good year at Cheltenham, though somewhat subdued. It felt a little quiet this year. Many of the big names were returning from the previous two years, and there was a distinct lack of free whisky, cheese and biscuits. They seem to have scaled back a bit after expanding to the racecourse in 2012. Perhaps it was the grizzly weather that's set in after the last of the summer sunshine, but it didn't feel its usual bustling self.

The online booking system has also gone a bit squiffy this year and people were complaining that they couldn't find what was on as easily. Hopefully they'll sort it out for next year and, now that they've introduced allocated seating, it would also be good if you could book your exact seat online so that people who don't deal well with stairs don't have to, and people with longer legs can stretch them in the aisles.

It's still a good event though, and there aren't many places you would get to meet so many of your favourite authors and actors in one place. Plus, Cheltenham has some very scrummy restaurants and patisseries to keep your strength up between shows.