Diary of a Dr. Who Addict 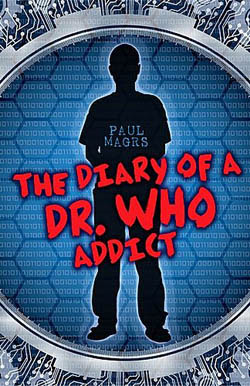 A while ago I did drinks in London with the lovely Will Davis (he of The Trapeze Artist, who is actually a real trapeze artist). As he lives near the Holloway Road, I swapped him a copy of On The Holloway Road by Andrew Blackmann for a copy of Diary of a Dr. Who Addict by Paul Magrs (AKA The Fiction Doctor), that I happened to spy on his table.

We'd all met briefly last year at booQfest, but I hadn't yet read any of Paul's work, so I was rather keen to borrow it.

Flash forward a month or so and I finally made it to that point in my pile. I really have been a pathetically slow reader of late. I tend to get through about a chapter a night. I like books with fewer than thirty chapters because that means I get to finish at least one book a month.

I was pleased to have Paul's book, but I was also a little reluctant to begin, wondering whether I should have chosen one of his adult novels instead. I invariably roll my eyes at YA, and I invariably end up loving it. I think it's because I spent so much of my oh-so-independent childhood proving that I could read Pratchett and Stephen King by Year Six, that I sort of bypassed a lot of the middle ground. There were a few exceptions, such as Point Horror, Fighting Fantasy, My Teacher is an Alien, and a really creepy one where some kids get stuck in a fairground and the elderly caretaker is out to get them... but generally something pretty gruesome had to happen to hold my attention, and those sort of books tend to be adult reading.

In fact, I've probably read more YA over the past couple of years than I ever did as a young adult.

Anyway, I digress. The Diary of a Dr. Who Addict:

It's the 1980s and David has just started secondary school. He's becoming a teenager, but still hanging onto the rituals of childhood, particularly his addiction to Doctor Who: sharing the books with his best friend and neighbour, Robert, and watching the TV show.

But adolescence is as strange and alien to David as anything the good Doctor encountered, so he's mystified when Robert begins to reject his hero in favour of girls, free weights and new music. Is it time for David to make a choice and move on too?

An evocative and moving portrayal of a boy finding his place in the world, set against a backdrop of Bowie, Blackpool and Breville toasters.

Ah, where to begin?

When you read very late at night, it's sort of like holding a conversation when you're drunk. You feel things more deeply, you fall into stories more easily.

It was a hideously uncomfortable read. There was just too much I recognised within it from my own school years, which I recall as being something akin to cruel and unusual punishment. Everything from the house party to the way teachers can turn, feelings of exclusion to having the desire to curl up and die when 'those' conversations were taking place.

I was totally transported back in time, as The Generation Game had managed with the simple mention of 'psychadelic orange squash', an image that could only ever evoke the 1980s as the chemicals involved are undoubtedly now banned. It was like blowing off the dust on a box of memories. Things I hadn't thought about in years. A bittersweet reminder of the bountiful creativity kids have before the pituitary gland kicks in and murders imagination.

I suspect I was as bug-nuts crazy about The X-Files as David was about Doctor Who, and there was definitely a Robert in my life, and I definitely remember the ouch factor of discovering that shared childhood pleasures were no longer cool.

I was a bit worried that I wouldn't understand this book, because I've never watched Doctor Who, but Will said that wouldn't be a problem, and he was right. Though I'm not a complete ignoramus, and I do know what a TARDIS is, and I loved the bit:

I'm looking for things I recognise in everything I read. I want to feel at home in these books I pick up. I want them to be more familiar than home and ordinary life. I think that's because I can pick them up and carry them with me. I always have the safe dimension of the book to escape into. Books are bigger on the inside than on the out, just like a police box.

I thought that was a wonderful observation.

Even did a bit of real time travelling as I finished at 3:20am, but the clocks went back, so it was only 2:20 and I got that extra hour lie in.

Brilliant book. Also the first LGBT YA I think I've read. Where were these when I was growing up? Don't recall seeing them on the shelves at the CoE school book fete...