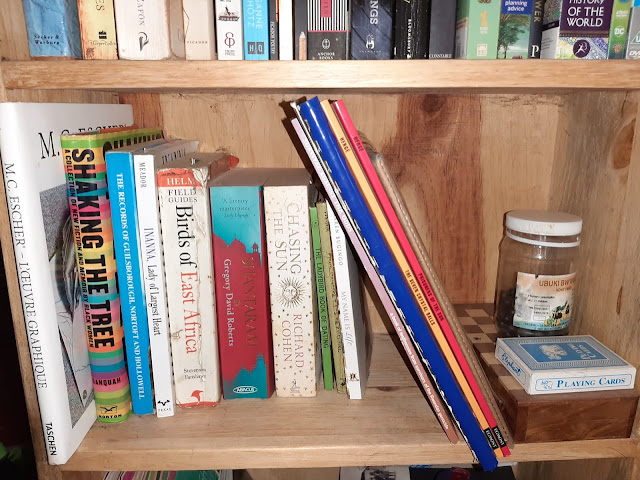 Having explored the top shelf of my bookshelf, let's continue the tour with the middle shelf. This is also a shelf for substantial works, some with unusual stories, but perhaps a little less read than the books on the top shelf. It's also got a cheeky games corner. 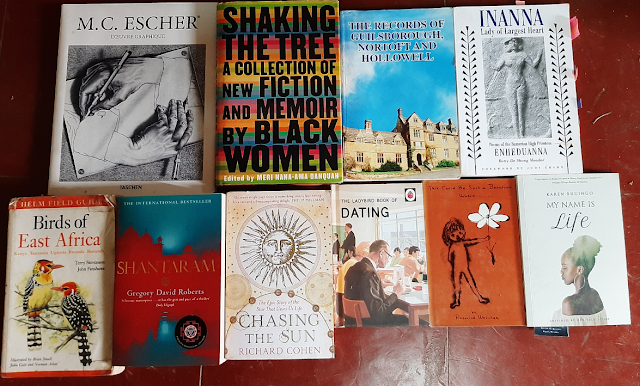 M. C. Escher by TASCHEN Books: Picked this up at the Escher Museum in The Hague. I dropped in to see my cousin, Tamsin, on the way back from giving a TEDx talk in Luxembourg in 2018. She had previously visited me in Rwanda, so it was lovely to hang out. The museum is well worth a visit and Escher's artwork is fabulously surreal. I also picked up this very cute paperweight there. 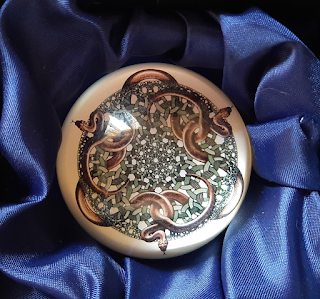 Shaking the Tree edited by Meri Nana-Ama Danquah: I actually have no recollection of where this came from. I sense I may have bought it in the UK, but can't be certain. I've read about half of it and do intend to finish it at some point. It's a collection of fiction excerpts and memoirs by black women. A collection of snapshots from people's worlds and imaginings.

The Records of Guilsborough, Nortoft and Hollowell by The Renton Sisters:  I grew up in Guilsborough, famed for its witchcraft. A few years back the new pub landlady decided to rename the Ward Arms the Witch and Sow as a tourist pull, but locals still - and hopefully always will - call it The Ward. Bloomin' commercialism. Anyway. These are historical records about Guilsborough, and two neighbouring villages, including a bit about the witchcraft and a bloody murder. I try to get back to the UK every couple of years for the Hollowell Steam Rally, but it was cancelled this year due to C19. I keep a copy with me for research purposes. The witches were part of the reason I started writing fiction in the first place. I originally set out to write a local history book, but then realised that bringing history to life through characters and chaotic plot lines is actually much more effective. Most people remember stories in a way they don't usually remember dry facts. The story of the witches is one I've always wanted to write, but haven't quite found the words yet.

Inanna, Lady of Largest Heart by Betty De Shong Meador: Another research book, linked to Woolley of Ur on the top shelf. Which may give away what my next novel will be about. If you do figure it out, I am desperately seeking the protagonist's complete translated works. I have reservations about this one. It's written with a strong feminist perspective. That doesn't necessarily make anything about the translation or its interpretation wrong, but I would welcome a comparative source. Still, it's a useful source of inspiration.

Birds of East Africa by Helm Field Guides: Well, this one has a story. One that I can now look back at and laugh. My former partner left me on New Year's Eve. Left me - and the country. On the way to the airport, they dropped by to dump a box of junk they 'thought I might want.' None of which I did, and all of which I've since given away, except for some sheets (hard to find here) and this book. This will probably go to a more enthusiastic twitcher at some point, but it's a book, so I couldn't just chuck it. Nothing says fond farewell like 'dispose of this crap for me.'

Shantaram by Gregory David Roberts: Bought at Ikirezi after three people in the same number of days told me how good it was. Someone also said he wrote it in prison and the manuscript was destroyed several times. He had to rewrite it from scratch. Anyone who has the strength of will to do that must have one hell of a story to tell. Procured a couple of years back and still not read. Likely to get it on audiobook soon. It took a bit of adjustment, but I get through many more audiobooks than printed ones nowadays. It's just so convenient being able to cook, shower and fall asleep to a book.

Chasing the Sun by Richard Cohen: Bought on the same day as The Fever, and also from Nakumatt. See top shelf. Only, this one I haven't read yet. it's literally all about, well... the sun. If I'm honest, I bought it because the cover was so beautiful. It's all shiny, befittingly.

The Ladybird Book of Dating: This was a present from someone. If I recall correctly - because she's the most likely suspect - I think it was probably Maia (see biscuit tin below). Actually, I think it turned up about the same time as the biscuit tin, on a fleeting visit to check on the restaurant. Anyway, it's hilarious. Wish I'd read it sooner.

This Could be Such a Beautiful World... by Rosalind Welcher: For a very brief time, my friend Maia had a second-hand book box in her café. Books largely gathered from expats setting sail for home or harsher climes. This was in that box and I was intrigued by the title and the cover. It's a strange little book with no verso, so no publication date, but was given to a Pamela in 1975, according to the inscription inside. According to Amazon, that would be three years after it was published.

My Name is Life by Karen Bugingo: This is a special book. I wrote in 2018 about attending the book launch, as I helped to edit it. It's a creative non-fiction work based around Karen's own experiences of surviving cancer. Cancer detection and treatment in Rwanda is slowly improving, but at the time Karen was ill, it was very difficult to get diagnosed. She became extremely sick and had to seek treatment in India. It was an absolute honour to work on this book and help bring it to market through Imagine We publishing house in Kigali. 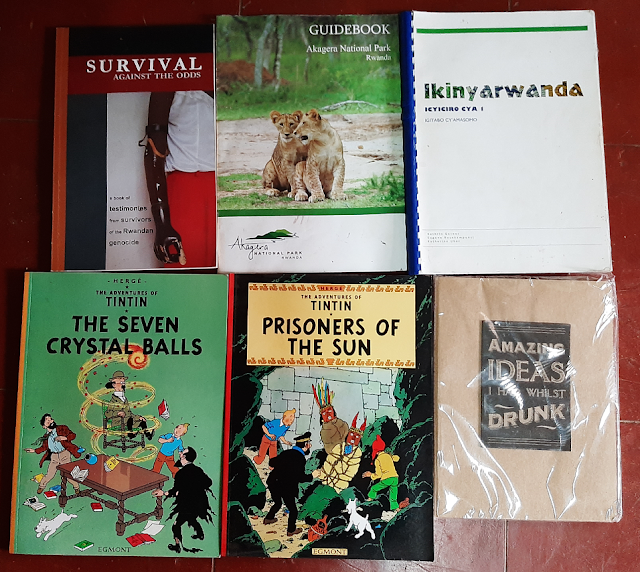 The side slanters on the right include:

Survival Against the Odds by Survivors Fund (SURF): This is a collection of testimonies from survivors of the 1994 Genocide against the Tutsi. I work for a couple of survivors organisations, and there were some copies of this in the office, so I took one. If this is a topic that interests you, check out this reading list and the Relentless Minds podcast.

Guidebook Akagera National Park: Akagera is our main safari hotspot in Rwanda. I think I picked this up when I took my mum and Merrick last year.

Ikinyarwanda Icyiciro Cya 1 (Kinyarwanda Level One): My friend Katie runs Inzora Rooftop Café behind Ikirezi Book Shop. She developed an excellent Kinyarwanda language course, which I took a couple of years after moving back here, to refresh my limited communication skills. My Kinya is just about good enough to order food, beer and get home on a moto, but it's never hugely progressed. Hoping that might change as Duolingo are threatening to add it, and Google Translate now also has a Kinya option. However, this book holds sentimental value for another reason. During one of the last lessons, Katie walked into class with the most adorable little kittens on her shoulder. She had found them abandoned in a bag outside the building, and asked whether anyone could take them. Everyone else very sensibly looked down at the table, but I slowly raised my hand. You can see just how cute they were in this video. Three of them survived and still live with me today: Sophie, Howl and Sen. It's been a real emotional rollercoaster, we've been through a lot together, and I love them very much. If I hadn't been sitting in that Kinyarwanda class that night, we never would have met.

Tin Tin, The Seven Crystal Balls & Prisoners of the Sun: These were a birthday present from one of my oldest friends, Jo, and her daughter Zuba. Jo and I have also been through a lot over the years. She trained me when I first arrived as a VSO in 2007. We returned to the UK around the same time, and moved back to Rwanda around the same time. I met Zuba soon after she was born and watched her grow into a fabulous individual. I've always bought her books for her birthdays, so this was them returning the favour.

Amazing Ideas I Had Whilst Drunk: I feel this might have been sent out to me as a birthday or Christmas present... I can't quite recall. But I'm sure you see the design flaw? It's wrapped in cellophane. How the hell are you supposed to get that off when drunk? Exactly. I never have.

Now for the fun and games. I have a standard pack of cards bought from T2000, a large Chinese shop in town. There's also a miniature chess set which I brought back from India. Rwandair started doing flights to Mumbai, so I met up with dad and Marilyn there in 2017, and we did the Golden Triangle after a little rest in Goa. Like pianos, a home doesn't feel like a home without a chess set, even if you never play it. The final addition is a plastic honey jar filled with seeds for playing omweso, or igisoro as it's called in Rwanda. It's a complex form of mankala that I learned to play in Kasubi Tombs, Uganda, back in 2008. The guy who taught me professed to be a royal prince and gave me a tour of the city. It's a fun game once you get the hang of it, but the seeds have a habit of rolling off across the floor. 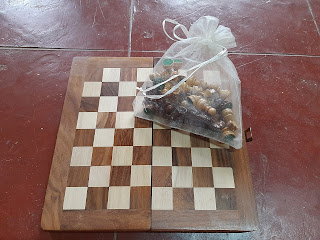 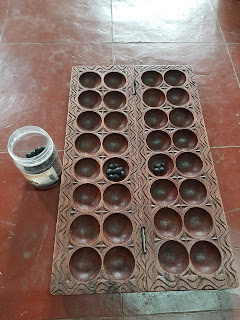 Another addition that lives on this shelf is a biscuit tin with a 1920s flapper on the front. It once contained scrumptious chocolate-chip cookies, but those were scoffed long ago. The tin was brought from the UK for me by my lovely friend, and fellow author, Maia. She founded a Spanish tapas restaurant in Kigali, CasaKeza, which is my local, and we've had many adventures together, including a jaunt to Idjwi Island and Lwiro Chimpanzee Sanctuary in the DRC. She now flits between the UK and Spain, and I miss her dearly. But she said this box reminded her of me. I have no idea what she means... 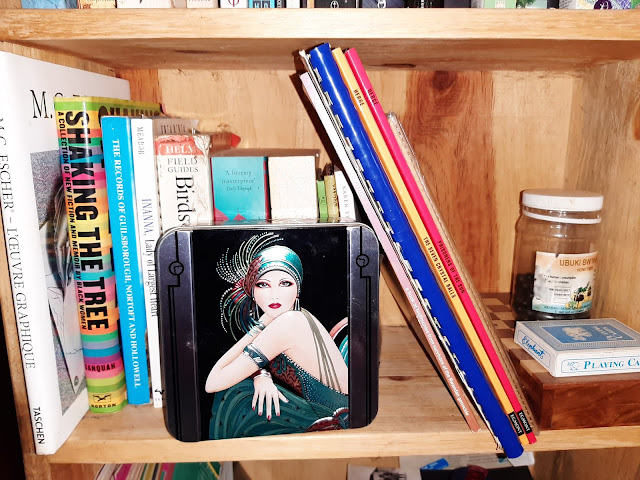 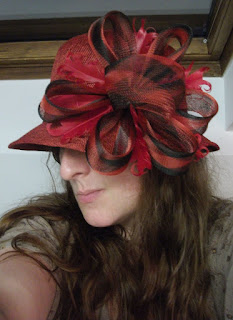