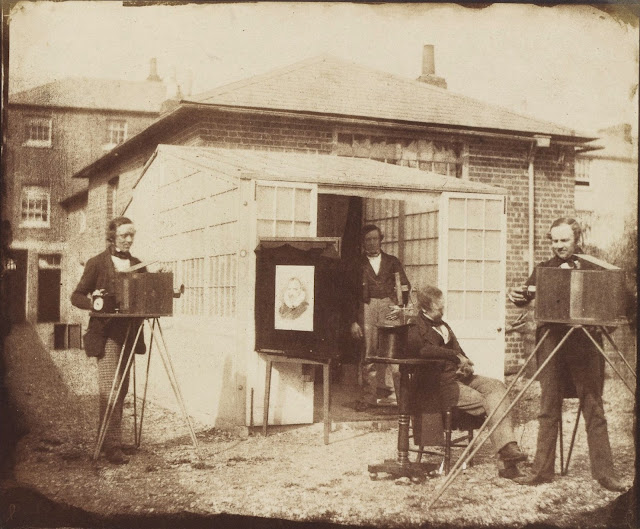 Definitely starting to ease into this one, but get the sense it'll take a while to complete. I'm back to my 2,000 a day routine but it is taking me most of the day to get there because the research is so heavy. Only 12,000 in and I've already contacted more experts for this novel than for any other. Thankfully, they've all been extremely helpful. The acknowledgement page will be a long one.

There are always weird little coincidences that occur when I start writing. This has been no exception.

One of the characters that makes a cameo is Henry Fox Talbot, one of the inventors of photography (far right in the picture).

Many years ago, just after I completed my undergrad, I moved into a house in Reading with a friend. It was Flat 3, 55 Baker Street. A very strange place as the bathroom was down a set of steps and the door to the bathroom had a slot in it. At one point it had been a home for unwed mothers and the peephole was so that the nuns could check the women were washing their babies correctly. Slightly creepy.

Anyway, its other claim to fame was that Henry Fox Talbot had lived there, according to the person who showed us around. He did indeed have a photographic studio on Baker Street, and I think the above picture was taken there.

I'd all but forgotten about it until I began my research.

At the time, I had no idea who Fox Talbot was. It's sort of funny that I find myself writing about him all these years later.

Another fun coincidence when I was looking up early exposure times.