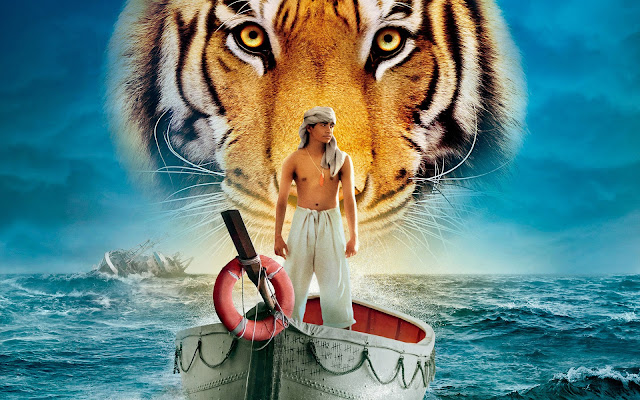 I read Life of Pi shortly after it first came out in 2001. I was living in Reading back then, and we were meeting my partner's workmate down the pub. When we arrived, he was reading this and told us it was good, so we followed suit.

He was right, it was very good. I wanted to see the film when it came out, but life got in the way. This week was Marilyn's birthday. Dad bought her a copy, so I finally got to watch it last night.

It was absolutely beautiful. Must have been quite something in 3D. Also impressed with the CGI. A very, very pretty film. I felt it did justice to the book.

Sadly, there are some things that can never really translate. Although it covered Pi's interest in world religions, it didn't manage to shoehorn in my favourite curse, which I still use sometimes: "Jesus, Mary, Muhammad and Vishnu!"

There was also a particular part from the book that always stuck with me about eating with your hands, and how quickly pleasure in simple things can be crushed by a throwaway comment.

The first time I went to an Indian restaurant in Canada I used my fingers. The waiter looked at me critically and said, "Fresh off the boat, are you?" I blanched. My fingers, which a second before had been taste buds savouring the food a little ahead of my mouth, became dirty under his gaze. They froze like criminals in the act. I didn't dare lick them. I wiped them guiltily on my napkin. He had no idea how deeply those words wounded me. They were like nails being driven into my flesh. I picked up the knife and fork. I had hardly ever used such implements. My hands trembled. My sambar lost its taste.

One of those passages it's harder to express in pictures than words.

Still, powerfully told through film. I must admit the overall riddle of the story was clearer once condensed. I came away more certain of the answer to 'what happened' than I had been after the book, but perhaps that's because I'm a little older now and I've read many more books, some equally as puzzling.

I was especially interested to see how they were going to handle the island of meerkats. Sadly, a long-running British advertising campaign meant that the moment the meerkats appeared, I expected them to try to sell him car insurance. Slightly spoilt the moment. But I was deeply impressed by the rendering. Almost as deeply impressed as I was with Yann Martel for coming up with such an imaginative concept as that island in the first place.

Top-notch adaptation, but would still recommend reading the book. 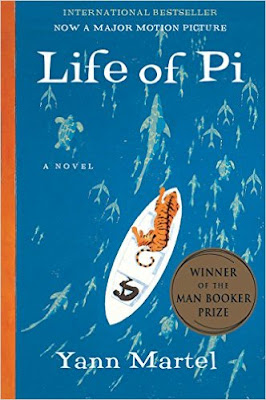