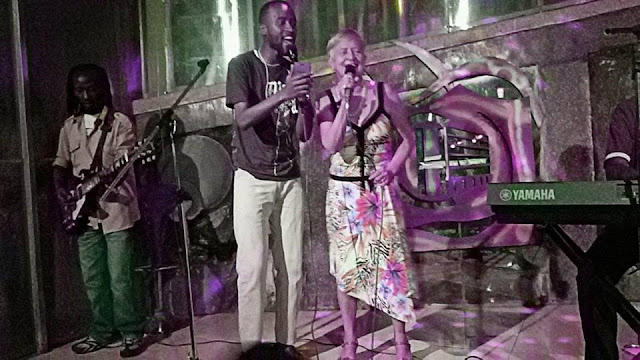 I have written more about my personal feelings elsewhere. It was very sudden, and I'm still taking it in.

But I wanted to mention Christiane here, on Deckle-Edged, because some of my strongest memories of her involve books.

About a year ago she moved from the capital out to the Western Province of Rwanda. There aren't many bookshops out that way, so whenever she came to Kigali, she stayed with me and borrowed books from my coffee table library.

We'd compare notes when she returned them. When she went into hospital the first thing I thought to pack was a book. It was a mystery novel someone had given me a few days before, though I don't recall the title. She just hated to be stuck anywhere without something good to read.

It was through this shared interest in books that she started reading mine. She's read all of them, I think. I worry that the last one she might have read was Children of Lir. It seems possible, as I sent it to her on 8 August, and she was already restricted to her bed by then. I don't know if she ever read it. Part of me hopes not. It is a gentle story, but it is a legend dealing entirely with the passage of time, with mortality, and with death.

I have already dedicated Children of Lir. I thought about re-dedicating it, but that's not her story. The one I'm writing now is: adventure, mystery, kookie characters and crazy plots. She'd like that far more, I think.

The final memory I'll share is a night we spent at her favourite Chinese restaurant in Kigali. She was drinking Gatanu, her favourite beer, and we were scoffing crispy fried beef.

She had just finished reading one of my novels, and she was trying to pay me a compliment without making it awkward - I'm not very good at accepting compliments about writing. Writers are always very aware that when friends pay compliments, they are friends, and they're supposed to be supportive. Christiane was making it very clear that she was a wide reader and it wasn't because we were friends that she thought I had talent. I squirmingly smiled and said 'thank you'.

Then she told me:

If you get the chance to write - you must.

Maybe that doesn't sound like much on paper, but the way she said it was important. Christiane had thrown in a good job at an insurance company after surviving breast cancer. She threw it in because she didn't want to spend the rest of her life in a 9-5 office job. She wanted to go to Africa. She wanted to build an ecolodge. She wanted to have a life, life, not just a life.

We talked a lot, and she knew how lukewarm I felt about my own vocation. I was toying with the idea of leaving development to set up writing retreats. Try to see whether I could turn a passion into a profession. We had it planned out. I'd take writers to her ecolodge on the shore of Lake Kivu - the perfect retreat.

That isn't going to happen now. Even if the lodge opens to the public in the future, I think I would find it difficult being there without Christiane. Macheo is her life and soul.

But what she was telling me is that we always find a way, and we shouldn't give in to life, let it dictate what we do at the expense of what we want to do.

Time is short. Christiane just proved that. So when I get back in the New Year, I'm going to set up a second business - a writing business - and see whether I can make it fly. If it fails, I have lost nothing. If it succeeds, I may have gained a lot. Either way, I'll keep writing. After all, I've got a book to finish.
at 13:14