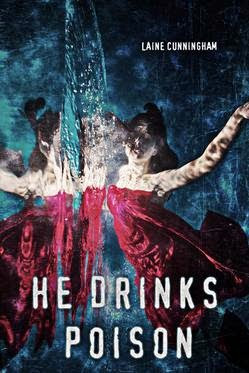 Shout out to Laine Cunningham for her latest book, He Drinks Poison. I absolutely love the cover.

​Priya Conlin-Kumar, conceived when her mother was gang-raped in India, became an FBI agent in order to stop violent criminals. While tracking a serial killer, she experiences visions from Hindu epic The Ramayana. As each new vision creeps further into the physical world, it seems that an ancient demon has reappeared.

When Priya falls in love with the county sheriff, they dabble in bondage. Each night opens her to pleasures she has always desired... and to the trust she has always craved. Soon their coupling mirrors that of Shiva and Shakti, the god and goddess who left marks on each other's flesh and whose passion shook the earth.

Their loving activities stand in stark contrast to the sexualized violence they face during the investigation. Priya eventually takes on Prince Ram's righteous anger and accesses the power of the dark goddess Kali. The justice she metes out satisfies both the laws of man and spiritual laws.

An interesting mix of crime thriller, erotica and the spiritual. Reminded me a bit of Colin Cotterill who also brings the spirit world into play with his Dr. Siri series set in Laos.

Atmospheric. Having grown up in Leicester with a strong Hindu community and the largest Diwali celebration outside India, it certainly struck a chord.

Highly poetic in parts, but you'll need a strong stomach for this one. I made the mistake of reading it over lunch... jam jars - eeww eeww eeeewww.

And believe me, it takes a lot for me to say eeww.

As an aside, I was interviewed by Laine a while back, and you can find her review of Rosy Hours here.
at 22:52