My Side of the Story 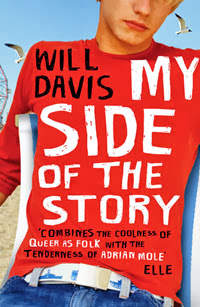 I really have to stop doing this. Second night up reading 'til 3am in a week. Brain's turned to mush, but I can't help it with writers this good.

I first met Will at booQfest last year, where he gave me a copy of The Trapeze Artist, the novel he was promoting at the time. I absolutely loved it, and swapped him for a copy of Georg[i]e when we went for drinks a couple of months back. Some other books exchanged hands and I took away a copy of Diary of a Dr. Who Addict by Paul Magrs (which was the other book that kept me awake this week).

Having enjoyed The Trapeze Artist, I decided to download a copy of My Side of the Story, Will's debut novel, which won the Betty Trask Award in 2007.

So what if your parents hate each other and want you to have therapy? So what if your holier-than-thou sister (aka The Nun) and her posse have decided you're going to hell? So what if the school tyrant and his goons are hunting you down, or if your best friend has just outed you to a neo-Nazi? Jaz isn't planning to lose any sleep over it - at least until he meets the guy of his dreams at the local gay bar. Suddenly things are a lot more complicated.

It's a bit strange reading a book when you sort of know someone. Mostly I'm completely lost in the story, but every now and then, like when you encounter a joke that makes you laugh out loud, it's as though that person has personally told you that joke; like the narrator just made a cameo.

The first thing I noticed was how radically different My Side is to The Trapeze Artist. This is ultra-contemporary, fast-paced fun. The latter is without a shadow of a doubt 'literary'. It's brilliant to see authors who can do that, like they've performed a magic trick: you thought I was one thing, but - ta dah! - I'm something else entirely. Sort of like when you see Hugh Laurie as Bertie Wooster and then playing banjo in a bluegrass band. It messes with your notion of reality as one solid constant, or any given individual as one single person.

It did feel a little surreal in places. There were some similar themes between this book, Dr. Who Addict and Georg[i]e, from major themes such as both their books being about schoolboys, involving house parties and an imprisoned Gran, to [spoiler] characters like Jaz and Phoebe deciding to drop in on friends only to discover they've departed this world prematurely, and judging people by the type of drink they order at the bar.

It's interesting that between three people there are already shared themes. Kind of makes you wonder about archetypes, how many plots there are in literature, intertwining cultural experiences, and the hive mind.

I really did enjoy this read, and there were some wonderful one-liners ('go fuck a chainsaw' and 'the molestables' being two I'm going to have to remember to use in a sentence sometime). I'd like to quote more, but the annoying thing about a Kindle (which is in all other respects miraculous), is that it's hard to flick back to the parts you remember. With a paperback, I always manage to remember the page number, or thereabouts, and it's very easy to flip to it, but with a Kindle the percentage is a bit vaguer and you have to bash away at the back button for an age.

Of course Mum's thrilled that I'm back before the agreed time, but I have this urge to talk to Grandma so I leave them to their excitement and go upstairs to find her.

She's in her room, the one which used to be mine, and she's lying fully clothed on the bed and snoring with her mouth open. It's pretty undignified really, plus one of her hands has fallen right into her crotch so it kind of looks like she's fallen asleep in the middle of having a wank.

I don't want to wake her up but I don't go right away either. There's something really fascinating about people when they're asleep, especially Grandma. I look at her and I wonder that it's going to be like at that age. It's a pretty sappy thing to imagine, but you can't help it when you're looking at old people sleeping. I think about all the time in between being Mum and Dad's age and being Grandma's age, and it just seems so awful that all that time's got to even happen that I practically fall over and have to steady myself by grabbing hold of the bed.

I look at her and I wonder if when I reach her age I'll just end up the same, all undignified and wishing death would just hurry up and come along and put me out of my misery. It's like, what's the point? I'd totally rather die suddenly when I'm young, even if it's in the middle of taking a shit or something.

When I was younger I used to think about death loads, before I started thinking about sex (which is kind of like the opposite of death so it's funny how these things connect). It's never bothered me like it bothers other people though, the fact that you have to die, because unlike The Nun I'm a total atheist and I don't believe in hell or any of that other crap. The only thing that's ever bothered me was the idea of dying on the toilet or something embarrassing like that. But I don't think even that bothers me any more 'cos it's not like you'll care about dying on the toilet and how it looks when they found you, or any of that kind of stuff, if you're dead.

Something I particularly connect with in Will's books is that he has these side characters that completely steal the show. In The Trapeze Artist it was Jethro the Clown, and in this it's got to be Fabian. He's really good at writing mean, extremely damaged characters whose vulnerability is utterly absorbing. They're not your standard (Fuck Face) bully, they're complex deviants that remain in your mind long after the final chapter.

Definitely worth picking up a copy. He's written a follow-up called How Not To Survive. I rarely read more than one book by any author (just because there are so many I'd like to get through), but I'm not quite ready to say goodbye to Jaz yet, although I do need to rein in on the late-night reading.
at 14:12