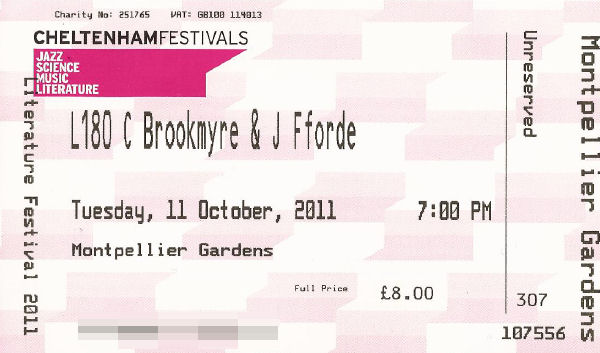 What could be more wonderful than a festival of books?

Had a brilliant night on Tuesday. First in our Cheltenham Literature Festival line-up.

Whilst in Rwanda, the Programme Office had a resource room upstairs. One entire wall of this room consisted of ceiling-to-floor books. All the tomes that VSO volunteers, past and present, had brought with them on the plane or  received in aid packages from friends and family.

One or two of these books 'did the rounds'. Something somebody had read was deemed to be so entertaining that people literally put their names on a list to borrow it. Absolute top of that list was a book called Emergency Sex (And Other Desperate Measures): True Stories from a War Zone, which I will devote an entirely different post to.

Another big hit was a book that a friend posted to me, stating: 'you must read this!' It was The Eyre Affair by Jasper Fforde. I believe that it may have ended up in Ireland after my friend lent it to his mother, who read it on the plane home. It certainly went on tour.

The Eyre Affair is the first in the Thursday Next series of literary detective novels. Literally literary. She's a book detective who solves crime in fiction - because fiction is real, and bad things happen.

Deliciously surreal and refreshingly ridiculous. I've since discovered that loads of my friends got there before me. One of them, on hearing that I'd got tickets to see Jasper Fforde, offered to take care of all my 'wine needs' in return for a signed copy. An extremely fair swap - I'm off to make the exchange next week.

Mr. Fforde appeared alongside another comic crime writer, Christopher Brookmyre. I'm ashamed to admit that I wasn't familiar with his work. But I'm about to be. He absolutely stole the show with a scathingly humorous run-down on how Stephenie Meyer's Twilight Saga became so popular. Comedy brilliance.

There were lots of really interesting topics discussed. Some that stuck with me include:

Use all Mediums of Inspiration

There was mention at one point of the aloof attitude of some literary writers towards the mediums of TV and film. The idea that literature should attempt to remain void of cinematic influence. Manifesting as a resistance to the inclusion of popular culture, for instance. As Brookmyre pointed out - cinema is possibly the dominant influence on today's society. Everybody is influenced by television and film to some extent, it's pretty much impossible not to be.

He went on to mention that computer games are now the number one entertainment industry in the world, and that more gaming companies are employing authors to develop background stories. Rather than simply churning out shoot-'em-ups, gamers are looking for a bit of depth to their carnage and bloodlust. Films and games are starting to overlap, influencing one another. He mentioned a recent film based on the concept of characters 'reloading'. It also brought to mind, for me, Silent Hill, which is a film entirely based on a video game.

Both Fforde and Brookmyre seemed to agree that people identify with popular culture in books. Why limit yourself to stand-alone literary fiction when you can draw from so many sources of inspiration throughout our collective culture? I thought that was a point well made.

On the other hand, you have to be a little careful which popular culture you plumb for. Fforde had made reference to Mel Gibson in a novel, before his spectacular fall from grace. As it can take around two years from inception to publication, these references may not hold the same connotations when they come to pass your reader's eye.

Fforde spoke about giving himself 'literary dares'. Coming up with a situation, giving yourself some rules, then trying to write your way out of it. This sounds like a fun exercise. One example he gave was turning a person into a banana, but he couldn't use the word 'banana'. It had to be written in such a way that the reader would finally understand what was happening without explicit reference. A simple dare that most of us have probably tried is to give yourself a list of obscure words and try to fit them into a short story.

It was entertaining to hear that, whilst Jasper Fforde deliberately sets out to write about places you wouldn't usually (Swindon and Reading, for instance), Christopher Brookmyre felt that certain types of books lend themselves to certain types of places. He suggested that particular accents may be associated with specific genres and characters. His books are set in Scotland, and he reckoned there was something about a Scottish, straight-talking accent that complimented crime writing.

I'm going to devote a separate post to accents and characters soon. That's what I love about the Literature Festival, it inspires me to think about so many things.

Brilliant start to the week, totally looking forward to Mark Thomas on Friday.
at 19:39