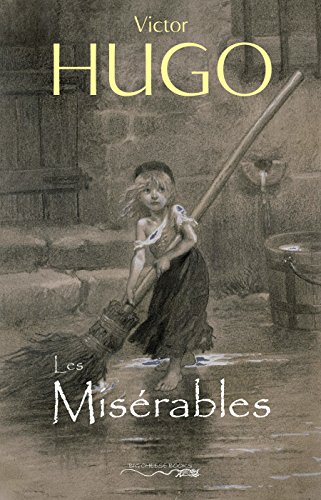 Christ on a bike.

This is the kind of review you can only write when an author is long dead.

I've always been a fan of the musical. My dad took me to see Phantom and Les Mis I think on the same day in the West End when I was a teen. Possibly a birthday treat? Loved them both for different reasons. I'd grown up listening to Phantom on an old vinyl my mother had, but I didn't know Les Mis at all and had no idea what to expect when we went in. It was utterly outstanding.

Years later, my mum's partner, Merrick, bought me a hardback copy of the book. It's one of those I'd always meant to read, especially since mum said, 'Marius wasn't a very nice guy.' Naturally, I wanted to find out why. I just never got around to it as the book requires two hands to lift and you can't exactly slip it in your bag.

First and foremost, the narrator, Bill Homewood, deserves an award. Sixty-eight hours of narration. A Herculean feat of story telling and audio editing.

Victor Hugo infuriates me. He has moments of absolute brilliance. The description of war in Les Mis is so vivid - the bodies down the well still calling out, and the horses hurtling into the ditch and crushing the soldiers. Unforgettable stuff, and some beautiful dialogue, such as Valjean revealing his identity to Marius.

And some beautiful turns of phrase, such as when Thénardier casts a 'furious glance' at Marius and then tries to conceal his emotion. Hugo describes how futile this concealment is, like 'trying to put a pane of glass over hell.'

There was also a bit about youth and age as light and shadow that really reminded me of a poem called Next of Kin by Christina Rossetti:


Nature divides living beings into those who are arriving and those who are departing. Those who are departing are turned towards the shadows, those who are arriving towards the light. Hence a gulf which is fatal on the part of the old, and involuntary on the part of the young. This breach, at first insensible, increases slowly, like all separations of branches. The boughs, without becoming detached from the trunk, grow away from it. It is no fault of theirs. Youth goes where there is joy, festivals, vivid lights, love. Old age goes towards the end. They do not lose sight of each other, but there is no longer a close connection. Young people feel the cooling off of life; old people, that of the tomb.

It is an incredible work, but it typifies novel writing in the pre-film era. The fact you can fit it down into a two-and-a-half hour film without really losing that many important scenes, kind of says it. I soon remembered why I put down The Hunchback of Notre Dame some years back. Hugo delivers these incredible scenes with rich, vivid vivacity - then he fucks off round the houses for half an hour, describing the street layout of Paris in great detail, or the 'leviathan's guts' (the sewers) for several pages... or, worse, just descends into singing. So much singing. Little Gavroche stole my heart in the musical, but by the end of the book I wanted to shoot him myself. Second only to Marius's grandfather, who just doesn't shut up.

That's really just my bugbear with Hugo. I think it stems from a desire most writers have to be part storyteller and part historian. Writing immortalises things, and it's natural that authors want to include places and people that are important to them, so a little remains for posterity. But he really takes it to another level. It feels at times like Les Mis could be split into two books, one a work of fiction with a really enthralling story and the other a factual history of France. It was like he was trying to preserve Paris between the pages.

I think there's also more than a bit of Hugo's own life woven in there, especially in the characters of Marius and Cosette, as Hugo courted his own wife, Adèle, in secret. It also surprised me when I thought I heard him interject as the narrator that he had seen the barricades, but he had:

On 5 June 1832, young Victor Hugo was writing a play in the Tuileries Gardens when he heard the sound of gunfire from the direction of Les Halles. The park-keeper had to unlock the gate of the deserted gardens to let Hugo out. Instead of hurrying home, he followed the sounds through the empty streets, unaware that half of Paris had already fallen to the insurgents. All about Les Halles were barricades. Hugo headed north up rue Montmartre, then turned right onto Passage du Saumon (currently called Passage Ben-Aïad), at last turning before rue du Bout du Monde (currently called rue Saint-Sauveur). When he was halfway down the alley, the grilles at either end were slammed shut. Hugo was surrounded by barricades and found shelter between some columns in the street, where all the shops were shuttered. For a quarter of an hour, bullets flew both ways. - Wiki

Something else I found interesting was the details about the woman who was shot at the start of the June Uprising. For some reason, that's always in my head when I think of Les Mis. I may be wrong, it was a long time ago, but I think there was a particularly vivid description of her in The Swan Thieves by Elizabeth Kostova. I might be thinking of the wrong book, but there was just a line about the hole in her head. I think, in my mind, I combined that with her falling back in the street in the film, but Hugo explains, if it's the same iconic woman, she wasn't in the street at all, just exceedingly unlucky:

The fact is, that three shots were suddenly discharged: the first killed Cholet, chief of the squadron, the second killed an old deaf woman who was in the act of closing her window, the third singed the shoulder of an officer...

Anyway. I love reading books after deciding that I like a story. I often do it that way around. Find a film I like, then go and find the book to find out what really happened - get the unabridged version. Some things that raised my eyebrows were that Gavroche was a Thénardier, so Éponine's brother. And the wedding scene in the 2012 film couldn't have happened like that as Madame Thénardier had died in prison awaiting trial.

One reason I do love classic literature is for the language. Hugo devotes several pages to the subject of slang, which is fascinating. If you enjoy etymology, you can find a copy in The Gutenberg Project and jump to the chapter on Slang which continues in the following chapters. One slightly amusing point of translation is that characters keep ejaculating all over the page. Thénardier ejaculates, the grandfather ejaculates, the gardener ejaculates, even Javert ejaculates at some point. I know it's childish, but I giggled every time. Ah, the joys of classical ejaculations.

I'm glad I finally got through it, but that's why I haven't been reviewing many books lately - it's taken a while. And, again, Bill Homewood was extremely impressive.
at 13:52