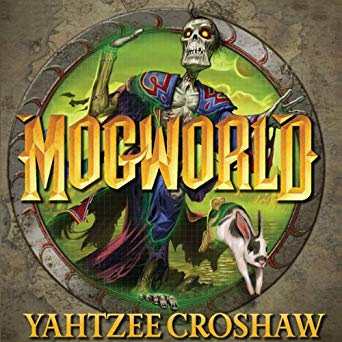 Back in March, I picked up a book called Differently Morphous by Yahtzee Croshaw and fell in love with it. I read quite eclectically, so with the exception of authors like Terry Pratchett and Chitra Banerjee Divakaruni, there are very few whose releases I follow. I usually love a book I stumble upon rather than deliberately go out to buy the next in a series by someone I've already read. There are a lot of authors I admire, but it's just a matter of hours in the day. Faced with someone I've read and someone I've never read, I usually opt for something new.

I enjoyed Differently Morphous so much though, that I thought I'd try out Crowshaw's first novel, Mogworld.

In a world full to bursting with would-be heroes, Jim couldn't be less interested in saving the day. His fireballs fizzle. He's awfully grumpy. Plus, he's been dead for about sixty years. When a renegade necromancer wrenches him from eternal slumber and into a world gone terribly, bizarrely wrong, all Jim wants is to find a way to die properly, once and for all.

On his side, he's got a few shambling corpses, an inept thief, and a powerful death wish. But he's up against tough odds: angry mobs of adventurers, a body falling apart at the seams and a team of programmers racing a deadline to hammer out the last few bugs in their AI.

I was not disappointed. It was a crackingly clever idea for a book and anyone who grew up playing RPGs, MUDs, MOOs and adventure games will get it instantly. I can't really say much more without giving stuff away, but once you realise what's going on it's very funny. Brought back a lot of gaming memories of maniacal mods and recurring resurrections. All delivered with Croshaw's trademark cynicism:

The rumbling was turning into a roar, the stairs were starting to shift beneath my hands and feet, and small bits of rock were raining down upon us constantly. A much larger bit of rock decided to join in the fun and thundered down the steps, but it flew over me and collided with someone I hadn't had time to care about.

When I was a child, my dad used to take us out badger watching sometimes; we'd sit in a wooden box staring at a hole in the ground, in the hope of catching a glimps of nature's most boring animal. All buggering night. But dad's twisted idea of a good time could finally prove useful.

"The same corruption of life that powers the- that powers James and Meryl, may be spreading to whatever magetechnology exists within the sphere."

"I don't really like 'corruption', it implies there's something wrong with them."

He smacked himself in the face in irritation, his signet ring clattered loudly against his mask. "They've both been dead for six decades and they're walking around. That strikes me as pretty damn wrong."

From the Jungles of Anorexia to the blade of the enchanted sword Killbastard, it's a very entertaining read. I really like his inventiveness when it comes to characters. Each book there's someone memorable. In this case, I think the award goes to Slippery John, a dreadful thief who always refers to himself in third person and shows a touching (ahem) amount of care towards a corpse warrior. There's also an evangelical priest who 'looks like he's been sucking vinegar from a stinging nettle,' and a fascinating character at the very beginning called Dreadgrave, who possesses some striking similarities - and wardrobe choices - to Doctor Diablerie.

It was also somewhat educational, introducing me to Quantum Suicide Theory, and the fact that computers have been passing the Turing test for years. I'm still trying to work out exactly when (comment if you know), as the BBC released an article reporting that the first computer passed the Turing test in 2014, but Mogworld was released in 2008 and says they'd already been doing it for years by then. It seems to have been ELIZA in 1966? Interesting stuff.

Anyway, enjoyed it and added a couple more Croshaw titles to my TBR.