The Healing Power of Papaya 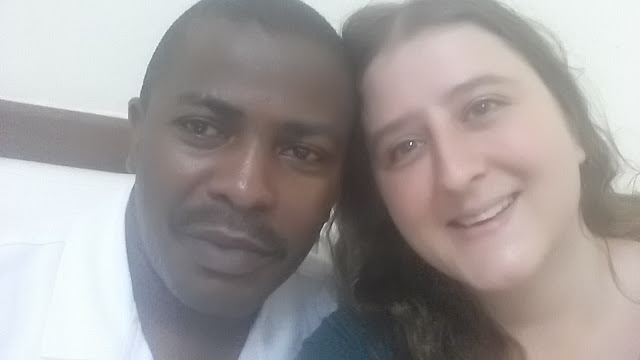 Those who have been following the finger fiasco either here or on my travel blog will have heard me mention the wonderful Nurse Moses, who has been making time for me every three days for the past two months. Well, this is he.

Was a bit tearful as I said goodbye on Monday. After two weeks off for good behaviour, I went back for a last examination by the dermatologist. Her name is Dr. Kimonye, but to me she will always be Dr. Caligari, because her consulting room is Cabinet No.6.

That's it now until September. Apparently you can't tell whether scars are likely to be permanent for at least three months, so I just keep rubbing on the cream until then. I can now type perfectly well, but I can't play the tin whistle or fully cope with the knife half of a knife and fork (I'm a lefty knify).

Had an emotional photo shoot, bought a wee thank you preset for Moses and a large tub of sweets for the staff. Everyone has been so kind to me, even on days when I was running a little low on good cheer. Really going to miss everyone.

Anyway, I just wanted to share some information in case it proves useful to others.

The reason it took me so long to get the all clear was that there was a patch of skin on my wrist that just refused to close. It was a real, weepy mess. We kept plying it with Fucidine, but that wasn't working and it left me feeling dreadful.

In absolute desperation, I tried pouring raw honey over it.

Someone had suggested I try this because honey is good for wounds. Raw honey simply means that it doesn't have any processed crap in it - straight from the hive. Rwanda makes exceedingly good honey.

It stung like nothing on earth. For a while I wondered whether I'd done something dreadfully stupid (almost as stupid as throwing myself on a bonfire), but within two hours the wound had completely closed and scabbed over! 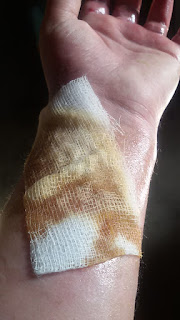 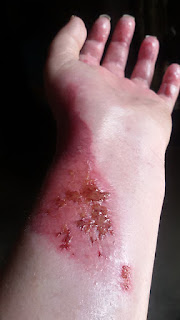 After two months of trying to get it to close, I could hardly believe my eyes.

Encouraged, I slathered on a thick layer of bee bum fluid and bandaged it up overnight. This didn't work so well. The next morning it was a little gunky again. When I went to the clinic, Moses explained that they use honey in traditional medicine here, but that it's best to apply it sparingly and leave uncovered. Following that advice, I managed to return to healthy scabs.

The problem, now that the wound had closed, was that the honey was a little too effective. The scabs were really thick and the skin started to pull in tightly around the sides. I worried that this would lead to severe scarring. Everything I was reading online suggested that wet dressings were best for the prevention of scars.

The antibiotic creams just made me feel yucky, and even the gentlest moisturisers were too harsh, burning and making the wound weep again.

During my research, I came across a few articles which suggested papaya (pawpaw) was good for wound healing. I happen to have two trees in my garden, so I decided to give it a go. The articles mostly said that papaya milk is best. You obtain the milk either by scoring the skin of a green (unripe) papaya, or by cutting the tree. There are two problems with this. Firstly, my trees are very tall, so there was no way of getting up there. Secondly, we are in the middle of the dry season. We haven't had rain in two months. It seemed a little unkind to bleed water from a tree that needed it more than I did.

I tried pulping a green papaya and using the juice to wash the wound, but that didn't work so well. 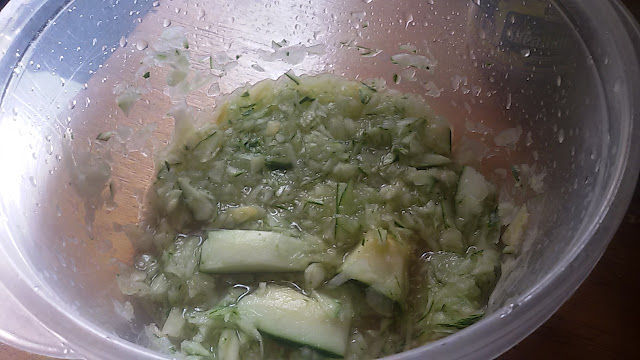 I managed to hook a ripe papaya instead, and thankfully this works just as well.

Take a clean fork and mush a bit of the fruit into a pulp - you only need a little, and it feels extra nice if you put it in the fridge beforehand to cool. Papaya is really weird stuff. What makes it so strange is that the fruit starts to dry pretty quickly when exposed to the air (it took about twenty minutes in a warm climate, so perhaps forty-five in a cooler place), yet the part touching the skin remains moist. This makes for an excellent natural dressing. As it dries, it sticks itself to the wound. You can move about and it won't fall off. 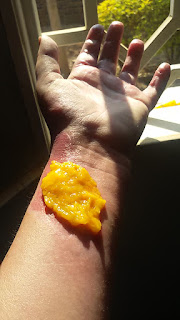 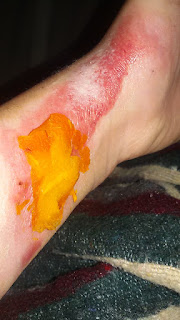 It does sting on an open wound, but nowhere near as badly as honey.

I applied a fresh dressing three times a day: morning, noon and night.

During the night, it can dry out completely. This really aches on an open wound because it pulls tightly on the skin. It woke me up a couple of times. It can also be quite tough to remove, and you may need to soak it off with tepid water. The process really isn't pleasant. It eats away at all the gunk in the wound - even the scab. Papaya contains an enzyme called papain, which is used as a meat tenderiser. As the fruit dries, it sticks to all this gunk and pulls it out when you remove the dressing. This can seriously smart, but it's worth it as it cleans out the wound really well, and the damaged skin starts to heal quickly under the moist, antiseptic, anti-inflammatory conditions.

After three days (nine applications) things were looking good. Honey had staunched the weeping, and papaya had reduced the scabs without reopening the wound.

At this stage, I found a tube of 100% aloe vera gel in my post box. My friend Sharon had sent it out from the UK. I didn't feel that there was much more to be gained from papaya at this stage as the scabs were much smaller and there was no more gunk to remove. I gave my arm a rinse, let it dry, and switched to the aloe vera, which is also lovely when kept in the fridge.

Don't worry if you can't get all of the papaya off when you clean. It can be pretty stubborn. Try your best, but don't damage yourself. It won't rot or anything. Your body and the aloe just seem to deal with it, as I found out.

On day three of applying aloe, I stepped out of the shower to discover the edges of the aloe peeling. The gel and the papaya residue had combined to create an orange film. Curious, I picked at it and the entire scabbed area simply lifted off, exposing perfectly smooth skin beneath. No sign of scars. 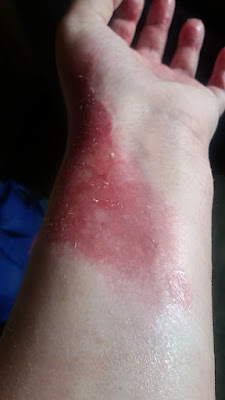 The above picture is after a couple more days of aloe application.

I am truly ecstatic. After two months of a weeping wound which antibiotic cream couldn't close, these three natural products sorted it within ten days.

Speaking only from my own experience, I'd suggest:

I would really love to hear whether other people find this helpful.

Once the skin is completely healed and ready for standard lotions and potions, I found unrefined shea butter quite nice. You may need to warm it up a little, it needs to be soft before you apply, especially to delicate skin. You can also mix it with a little massage oil. I've been using a shea product called Miss Africa, produced in Ghana, packaged in Kenya, probably available in the UK. It doesn't smell fantastic, but it's supposed to do wonderful things for the skin.